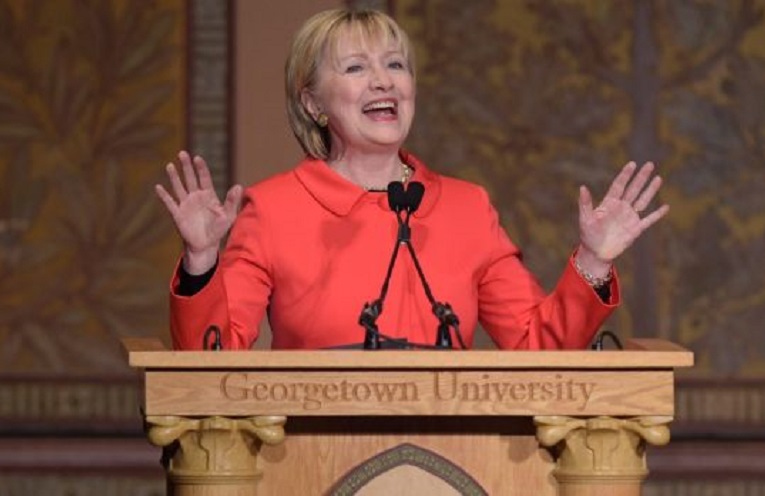 Washington: Hillary Clinton stepped back into the spotlight this week after laying relatively low since losing the US presidential election, and she had some advice for Donald Trump: Tear up the White House budget plan.

Clinton was at the Georgetown Institute for Women, Peace and Security on Friday to bestow an award named in her honour to Colombian leaders who helped bring an end to war in that country and elevate the role of women in the peace process.

She spoke of the progress the world has made in advancing women’s rights since she spoke forcefully on the issue two decades ago when the UN gathered world leaders to address it in Beijing. But she warned that progress is threatened by Trump.

“We are seeing signals of a shift that should alarm us all,” Clinton said. “This administration’s proposed cuts to international health, development and diplomacy would be a blow to women and children and a grave mistake for our country.”

She said the “great unfinished business of the 21st century” was guaranteeing equal rights for women and girls.

Clinton then raised a letter signed by 120 former generals and admirals beseeching the Trump administration not to make the cuts.

“These distinguished men and women who have served in uniform recognise that turning our back on diplomacy won’t make our country safer. It will undermine our security and our standing in the world,” she said.

A lot has changed since Clinton was on the campaign trail, but some things about her style on the stump haven’t. She pulled out a favourite line from last year as she started to talk about a study that backed up her point about the damage Trump’s budget plan could do.

Drawing applause from the crowd, she remarked, “here I go again, talking about research, evidence and facts”.

Clinton stressed the need for spending on diplomacy by quoting Defence Secretary James Mattis, who said cutting funds for the State Department means he has to buy more ammunition.

It was the second time in a week Clinton had stepped back into the spotlight in another sign that she has decided to remain silent no longer.