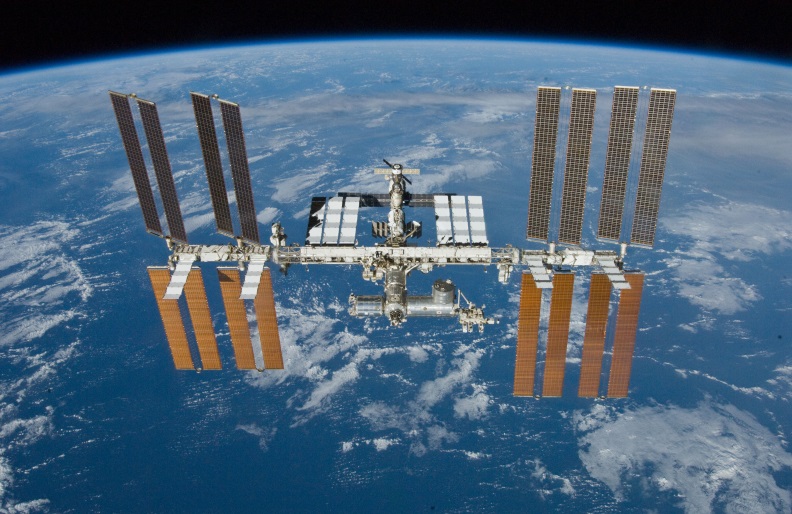 It allows users to peer inside the ISS from their computer 396km below with 360-degree, panoramic views

You’ve used Google Street View to check out a new apartment, map traffic before you hit the road and search for haunting slices of the everyday world.

Now, the comprehensive terrestrial mapping system has gone Extra-Terrestrial, allowing users to peer inside the International Space Station (ISS) from their computer 248 miles below with 360-degree, panoramic views.

The Street View imagery was captured by Thomas Pesquet, an astronaut with the European Space Agency, who spent six months aboard the ISS before returning to Earth in June.

Google Street View, which is featured in Google Maps and Google World, was launched in 2007 and quickly expanded locations around the globe, including places as remote as Mt. Everest base camp and as offbeat as Loch Ness. The vast majority of Street View’s photography is shot by a vehicle, whose movement is available to fans online.

Google’s foray into space is the first time Street View imagery was captured beyond planet Earth. 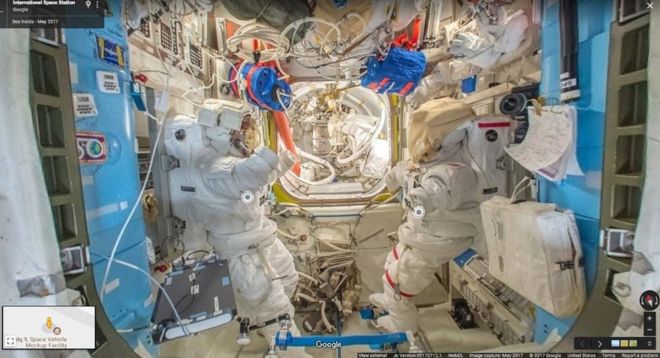 In a blog post about his experience, Pesquet wrote that “it was difficult to find the words or take a picture that accurately describes the feeling of being in space.”

“Working with Google on my latest mission, I captured Street View imagery to show what the ISS looks like from the inside, and share what it’s like to look down on Earth from space,” he added.

The virtual tour allows users to peek into areas where astronauts eat, exercise, work and even bathe.

Pesquet’s imagery reveal an environment that may look a bit cramped and chaotic — if not altogether dizzying — to humans anchored on Earth, but some of the scenes from side the ISS are downright mesmerising.

The images were captured using DSLR cameras and then “stitched together” back on Earth to create panoramic views.

Pesquet noted that the ISS is a “busy place” with six crew members working and researching 12 hours a day.

“There are a lot of obstacles up there, and we had limited time to capture the imagery, so we had to be confident that our approach would work. Oh, and there’s that whole zero gravity thing,” he wrote.

Floating through the ISS online you’ll notice clickable dots with detailed descriptions of the space and it’s objects to help viewers understand what exactly they’re looking at. Pesquet noted that this is the first time annotations — “helpful little notes that pop up as you explore the ISS” — have been added to Street View imagery. 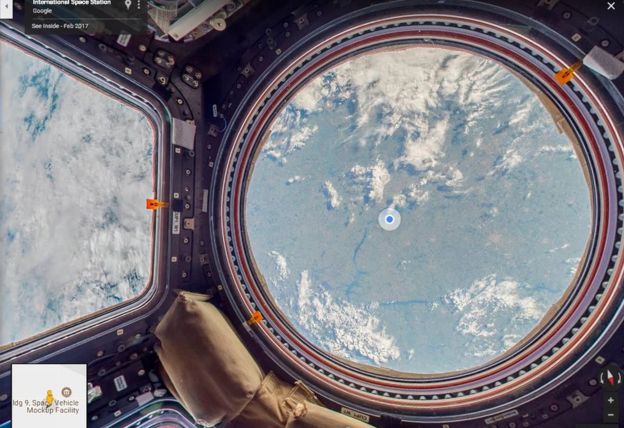 “The first crew arrived on November 2, 2000,” Nasa reports. “People have lived on the space station ever since. Over time more pieces have been added. Nasa and its partners around the world finished the space station in 2011.”

Nasa compares the inside of the station to the inside of a house, noting that the structure — which weighs almost one million pounds and covers an area the side of a football field — has five bedrooms, two bathrooms, a gymnasium and a big bay window.

The station houses labs from the United States, Russia, Japan and Europe.

“We can collect data on the Earth’s oceans, atmosphere and land surface,” Pesquet wrote. “We can conduct experiments and studies that we wouldn’t be able to do from Earth, like monitoring how the human body reacts to microgravity, solving mysteries of the immune system, studying cyclones in order to alert populations and governments when a storm is approaching, or monitoring marine litter — the rapidly increasing amount waste found in our oceans.”

Several times a week, Mission Control at Nasa’s Johnson Space Centre in Houston, Texas, determines where earthlings can spot the station from the ground below from thousands of locations all over the globe.

This article was originally published by Gulf News. Read the original article.