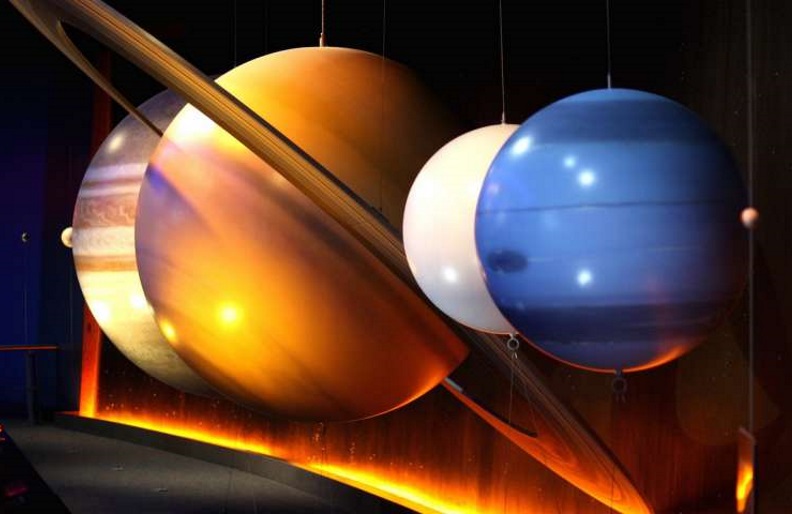 For the second time this year, the five brightest planets can be seen at the same time. You can catch them by looking towards the western sky after sunset. The planets will form a line rising up from the horizon.

Mercury and Venus are low to the west, with bright Jupiter shining just above. Higher up in the northwestern sky is Saturn, and completing the set of five is the red planet Mars, high overhead.

On Friday October 12 a beautiful crescent Moon sits just to the right of Jupiter. Keep watching the planets night after night and you can track the progression of the Moon.

As the Moon zips around Earth each month, its apparent motion in the sky is much faster than the more leisurely motion of the planets in their orbits around the Sun.

That will also be a perfect evening to see the planets, as Venus and Mercury will be sitting side by side. Of all the five planets, Mercury is the faintest and therefore hardest to see, so having bright Venus as a signpost to Mercury is always an advantage.

In about a week’s time, Venus, which has been the bright evening star for most of this year, will move into the glare of the Sun and out of the night sky.

The planets have been doing a merry dance in the night sky over the past few months.

Back in July, they also came together in the evening sky, but on that occasion they were stretched right across the sky. Mercury and Venus could be found in the west, while Jupiter, Saturn and Mars were rising in the east.

As Mercury and Venus are the inner planets, orbiting closer to the Sun than Earth does, we only ever see these two low to the west after sunset, or low to the east before sunrise. They are the planets either following or leading the Sun.

In contrast, the outer planets of Mars, Jupiter and Saturn can drift right across the sky, which is exactly what they have been doing since July. The trio has moved from east to west, and now they join Mercury and Venus to put on the five-planet show.

It may seem like a common occurrence, since the five planets have come together again in the space of just a few months. But it’s only possible because Jupiter and Saturn are currently on the same side of the Sun and therefore near each other, relatively speaking.

The five planets have come together twice this year and twice in 2016, but before that there was a decade when it just wasn’t possible. The two gas giants were too far apart.

As Jupiter and Saturn pair up in the sky, it’s only a matter of time before the other planets fall into the right configuration to bring them all together.

The next time this occurs will be in July 2020, but it will be harder to see compared to this week. The planets will be stretched across the sky rather than all clustered together in the west as they are right now.

So it’s still special to spot the five planets coming together. There’s great satisfaction in being able to tick off all five planets in a single viewing.

Not only are the five easy-to-see planets visible in the evening sky, but they are joined by Uranus and Neptune to complete the planetary set.

These two ice giants that orbit beyond Saturn are modern-day planets. They were not known in ancient times because their discovery needed the aid of a telescope and an understanding of gravity to know how the Solar System works.

But while they may not be seen with the naked eye, Uranus is low in the east at sunset and Neptune is higher up, about midway to Mars.

Practised observers, viewing the sky from a dark country site, have been able to see Uranus with the naked eye by knowing exactly where to look. Through binoculars, Uranus appears like a faint star but a good telescope will show its slightly bluish disc.

It is best to wait until later in the evening, when Uranus has risen higher, to try to observe it. But now is an ideal time, as the planet is approaching opposition on October 24, when it will be at its best.

Neptune is about the same size as Uranus but much further away, making it harder to see. Even with a modest telescope it appears as a bluish star, while the right observing conditions and a high-quality telescope are needed to reveal Neptune’s disc.

Lastly, and not to be left out, even the dwarf planet Pluto joins the crowd. It’s much too small and distant to be seen but currently sits about midway between Saturn and Mars.

Even with a high-quality telescope Pluto only ever appears as a faint star-like object, and it will be a challenge for most (myself included) to find it in its current position among all the stars near the bright Milky Way.

If you are up for the challenge, a free astronomy program such as Stellarium is ideal to help locate the planets. But it’s just as rewarding to enjoy the five bright planets, observed since ancient times, briefly coming together in the western sky.

Provided by: The Conversation Read the original article.