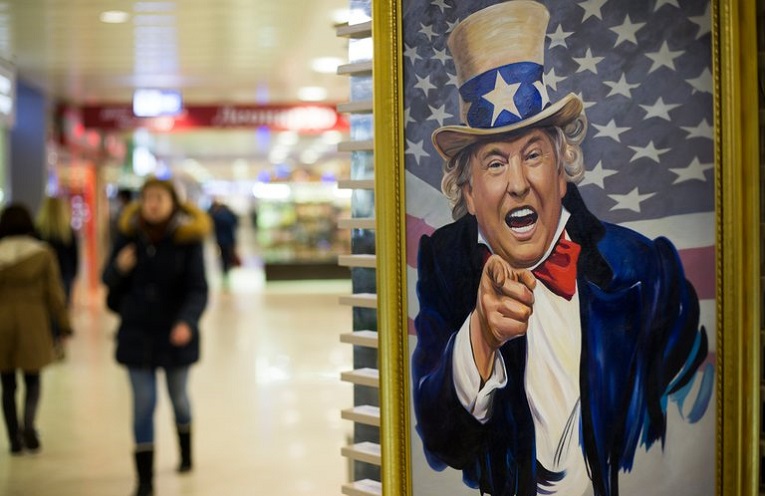 A parrot flies out the window in Soviet Russia. The owner rushes to the Moscow offices of the K.G.B., where he tells an agent: “I just want to make clear that any views my parrot expresses are exclusively its own.”

We are not yet worrying about what our parrots might blurt out in Donald Trump’s America. But there are disturbing signs. This presidency is about the fear-driven closing of borders and minds.

Audacious ignorance is hard at work in the White House. The only solace is that, with Trump, it’s accompanied by paralyzing incompetence.

In 1987, Trump took out a full-page ad in The New York Times. It said: “The world is laughing at America’s politicians as we protect ships we don’t own, carrying oil we don’t need, destined for allies who won’t help.” It concluded: “Let America’s economy grow unencumbered by the cost of defending those who can easily afford to pay us for the defense of their freedom. Let’s not let our great country be laughed at anymore.”

That was three decades ago. Trump won’t change. At 70 he’s what he was at 40 in crankier and bulkier form. His political formula was already clear: mythical American humiliation calls for muscular American nationalism led by a macho American savior. It was not very original, but then forked human nature does not change.

Trump is still demanding that allies pay up. Life was never more than a zero-sum game for him. He has not grasped that the stability and prosperity of Asian and European allies of the United States contribute to American well-being (like some $1.1 trillion of annual trade between the United States and the European Union supporting about 2.6 million American jobs in 2014).

That same day in 1987, the Times ran a story headlined “Trump Gives a Vague Hint of a Candidacy.” America-first economic and military nationalism was always going to be his theme. It will define his presidency.

The few adults in his circle, already weary of putting out fires caused by foolishness, may be able to temper excesses here and there, but the president sets the course. Time to start thinking about what a post-American Europe and a post-American Asia will look like. One certainty: They will be less stable. Another: Russia and China will assert broader, more exclusive spheres of influence.

Trump sees moral equivalency between the United States and a Russian regime that murders dissenting politicians in broad daylight, brutalizes its opponents, hacks into the American election, and traffics in the whopping lie. He is so beholden to, or seduced by, Vladimir Putin’s Russia that he will not murmur criticism. Enough said. This is a moral abdication of such proportions that America’s alliances are left without ideological foundation. They must then wither.

At night in the ghostly White House, when Ivanka and Jared have gone home, and his consiglieri have retired to their Russian salads, the gold-robed president — crazed as Lear on the cliffs “fantastically dressed with wildflowers” — wanders from room to room staring at TV screens, cursing in frustration when he cannot find the remote, hurling abuse at the “enemies of the people” who fail to genuflect daily before his genius, adjusting his hair, making random calls to aides to ensure they have scheduled his next play dates with truckers and coal miners.

It might almost be funny. Almost. But the day will come when the Dow plunges and what the former British Prime Minister Harold Macmillan is said to have feared most in politics — “events, dear Boy, events” — occurs, perhaps in ghastly terrorist form, and an incoherent administration will be confronted by its first crisis. All that can be said for now is that, in such a moment, illiberalism and xenophobia in the hands of a would-be autocrat will make for a dangerous brew.

Already, in countless small ways, America is narrowing in ways that hurt it. Foreign applications to U.S. colleges have dropped. USA Today reports that “an inhospitable political climate could punch an $18 billion hole in U.S. tourism by international visitors over the next two years.”

Mirjam Zadoff, a German associate professor of history at Indiana University who has been in the country a couple of years on an H-1B work visa, told me the other day how alarmed her 10-year-old son had become because one of the three Muslim children in his class had talked about the possibility of having to leave. Her normally easygoing son had become anxious. Would his family be next? When the class was given an assignment to complete a sentence beginning “Keep calm” he wrote, “Keep calm and don’t kill Donald Trump.”

A “Foreigners Unwelcome” sign now hangs over Trump’s United States. It causes fears even in children. It will not boost American jobs; on the contrary.

A parrot flew in my window and said, “America First! America First!” Its views were exclusively its own, of course. Still, the parrot was so agitated I decided to report the owner.