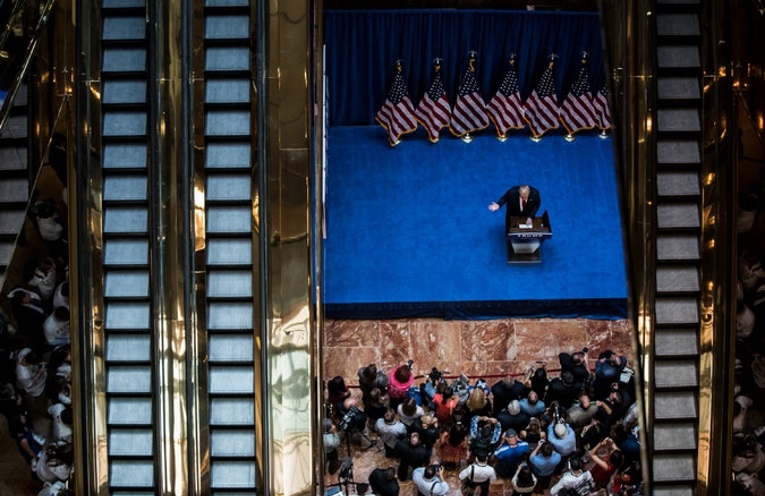 Donald John Trump was elected the 45th president of the United States on Tuesday in a stunning culmination of an explosive, populist and polarizing campaign that took relentless aim at the institutions and long-held ideals of American democracy.

The surprise outcome, defying late polls that showed Hillary Clinton with a modest but persistent edge, threatened convulsions throughout the country and the world, where skeptics had watched with alarm as Mr. Trump’s unvarnished overtures to disillusioned voters took hold.

The triumph for Mr. Trump, 70, a real estate developer-turned-reality television star with no government experience, was a powerful rejection of the establishment forces that had assembled against him, from the world of business to government, and the consensus they had forged on everything from trade to immigration.

The results amounted to a repudiation, not only of Mrs. Clinton, but of President Obama, whose legacy is suddenly imperiled. And it was a decisive demonstration of power by a largely overlooked coalition of mostly blue-collar white and working-class voters who felt that the promise of the United States had slipped their grasp amid decades of globalization and multiculturalism. 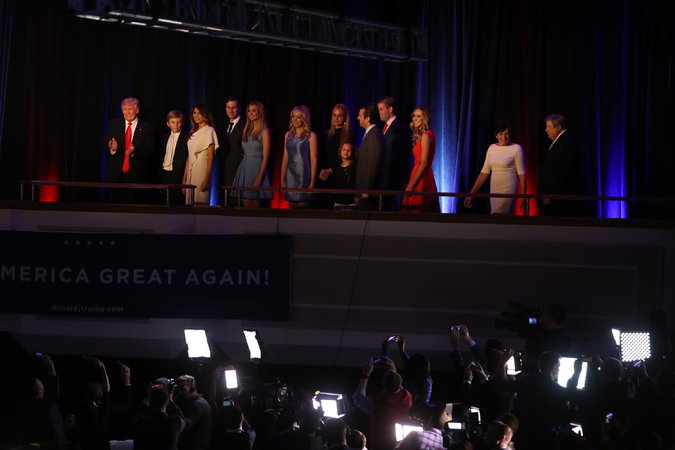 In Mr. Trump, a thrice-married Manhattanite who lives in a marble-wrapped three-story penthouse apartment on Fifth Avenue, they found an improbable champion.

“The forgotten men and women of our country will be forgotten no longer,” Mr. Trump told supporters around 3 a.m. on Wednesday at a rally in New York City, just after Mrs. Clinton called to concede.

In a departure from a blistering campaign in which he repeatedly stoked division, Mr. Trump sought to do something he had conspicuously avoided as a candidate: Appeal for unity.

“Now it’s time for America to bind the wounds of division,” he said. “It is time for us to come together as one united people. It’s time.”

That, he added, “is so important to me.”

He offered unusually warm words for Mrs. Clinton, who he has suggested should be in jail, saying she was owed “a major debt of gratitude for her service to our country.”

Bolstered by Mr. Trump’s strong showing, Republicans retained control of the Senate. Only one Republican-controlled seat, in Illinois, fell to Democrats early in the evening. And Senator Richard Burr of North Carolina, a Republican, easily won re-election in a race that had been among the country’s most competitive. A handful of other Republican incumbents facing difficult races were running better than expected.

Mr. Trump’s win — stretching across the battleground states of Florida, North Carolina, Ohio and Pennsylvania — seemed likely to set off financial jitters and immediate unease among international allies, many of which were startled when Mr. Trump in his campaign cast doubt on the necessity of America’s military commitments abroad and its allegiance to international economic partnerships.

From the moment he entered the campaign, with a shocking set of claims that Mexican immigrants were rapists and criminals, Mr. Trump was widely underestimated as a candidate, first by his opponents for the Republican nomination and later by Mrs. Clinton, his Democratic rival. His rise was largely missed by polling organizations and data analysts. And an air of improbability trailed his campaign, to the detriment of those who dismissed his angry message, his improvisational style and his appeal to disillusioned voters.

He suggested remedies that raised questions of constitutionality, like a ban on Muslims entering the United States.

He threatened opponents, promising lawsuits against news organizations that covered him critically and women who accused him of sexual assault. At times, he simply lied.

His rallies — furious, entertaining, heavy on name-calling and nationalist overtones — became the nexus of a political movement, with daily promises of sweeping victory, in the election and otherwise, and an insistence that the country’s political machinery was “rigged” against Mr. Trump and those who admired him.

He seemed to embody the success and grandeur that so many of his followers felt was missing from their own lives — and from the country itself. And he scoffed at the poll-driven word-parsing ways of modern politics, calling them a waste of time and money. Instead, he relied on his gut.

At his victory party at the New York Hilton Midtown, where a raucous crowd indulged in a cash bar and wore hats bearing his ubiquitous campaign slogan “Make America Great Again,” voters expressed gratification that their voices had, at last, been heard.

“He was talking to people who weren’t being spoken to,” said Joseph Gravagna, 37, a marketing company owner from Rockland County, N.Y. “That’s how I knew he was going to win.”

For Mrs. Clinton, the defeat signaled an astonishing end to a political dynasty that has colored Democratic politics for a generation. Eight years after losing to President Obama in the Democratic primary — and 16 years after leaving the White House for the United States Senate, as President Bill Clinton exited office — she had seemed positioned to carry on two legacies: her husband’s and the president’s.

Her shocking loss was a devastating turn for the sprawling world of Clinton aides and strategists who believed they had built an electoral machine that would swamp Mr. Trump’s ragtag band of loyal operatives and family members, many of whom had no experience running a national campaign.

On Tuesday night, stricken Clinton aides who believed that Mr. Trump had no mathematical path to victory, anxiously paced the Jacob K. Javits Convention Center as states in which they were confident of victory, like Florida and North Carolina, either fell to Mr. Trump or seemed in danger of tipping his way.

Mrs. Clinton watched the grim results roll in from a suite at the nearby Peninsula Hotel, surrounded by her family, friends and advisers who had the day before celebrated her candidacy with a champagne toast on her campaign plane.

But over and over, Mrs. Clinton’s weaknesses as a candidate were exposed. She failed to excite voters hungry for change. She struggled to build trust with Americans who were baffled by her decision to use a private email server as secretary of state. And she strained to make a persuasive case for herself as a champion of the economically downtrodden after delivering perfunctory paid speeches that earned her millions of dollars.

The returns Tuesday also amounted to a historic rebuke of the Democratic Party from the white blue-collar voters who had formed the party base from the presidency of Franklin D. Roosevelt to Mr. Clinton’s. Yet Mrs. Clinton and her advisers had taken for granted that states like Michigan and Wisconsin would stick with a Democratic nominee, and that she could repeat Mr. Obama’s strategy of mobilizing the party’s ascendant liberal coalition rather than pursuing a more moderate course like her husband did 24 years ago.

But not until these voters were offered a Republican who ran as an unapologetic populist, railing against foreign trade deals and illegal immigration, did they move so drastically away from their ancestral political home.

To the surprise of many on the left, white voters who had helped elect the nation’s first black president, appeared more reluctant to line up behind a white woman.

From Pennsylvania to Wisconsin, industrial towns once full of union voters who for decades offered their votes to Democratic presidential candidates, even in the party’s lean years, shifted to Mr. Trump’s Republican Party. One county in the Mahoning Valley of Ohio, Trumbull, went to Mr. Trump by a six-point margin. Four years ago, Mr. Obama won there by 22 points.

Mrs. Clinton’s loss was especially crushing to millions who had cheered her march toward history as, they hoped, the nation’s first female president. For supporters, the election often felt like a referendum on gender progress: an opportunity to elevate a woman to the nation’s top job and to repudiate a man whose remarkably boorish behavior toward women had assumed center stage during much of the campaign.

Mr. Trump boasted, in a 2005 video released last month, about using his public profile to commit sexual assault. He suggested that female political rivals lacked a presidential “look.” He ranked women on a scale of one to 10, even holding forth on the desirability of his own daughter — the kind of throwback male behavior that many in the country assumed would disqualify a candidate for high office.

On Tuesday, the public’s verdict was rendered.

Uncertainty abounds as Mr. Trump prepares to take office. His campaign featured a shape-shifting list of policy proposals, often seeming to change hour to hour. His staff was in constant turmoil, with Mr. Trump’s children serving critical campaign roles and a rotating cast of advisers alternately seeking access to Mr. Trump’s ear, losing it and, often, regaining it, depending on the day.

Even Mr. Trump’s full embrace of the Republican Party came exceedingly late in life, leaving members of both parties unsure about what he truly believes. He has donated heavily to both parties and has long described his politics as the transactional reality of a businessman.

Mr. Trump’s dozens of business entanglements — many of them in foreign countries — will follow him into the Oval Office, raising questions about potential conflicts of interest. His refusal to release his tax returns, and his acknowledgment that he did not pay federal income taxes for years, has left the American people with considerable gaps in their understanding of the financial dealings.

But this they do know: Mr. Trump will thoroughly reimagine the tone, standards and expectations of the presidency, molding it in his own self-aggrandizing image.

Trump After Election Victory: ‘It Is Time for Us to Come Together’ 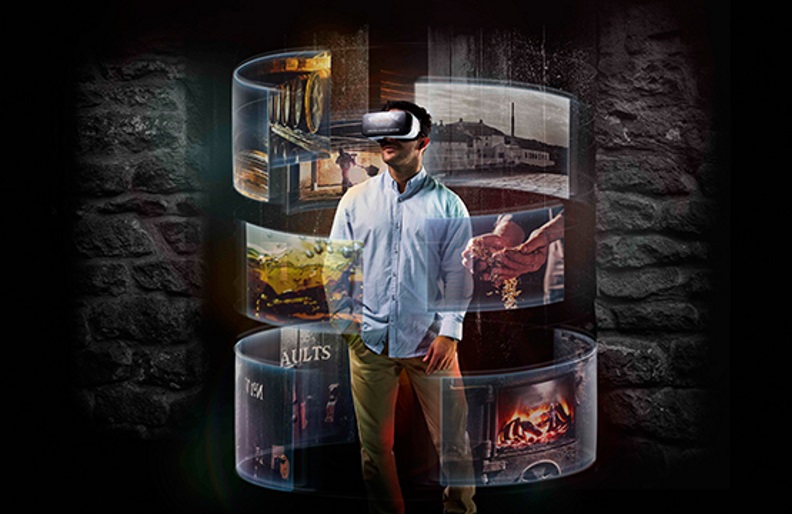 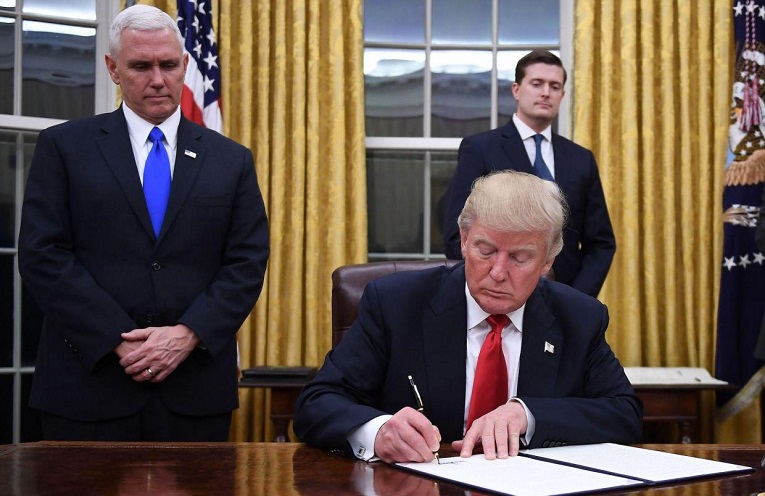 Mass Deportations Could Hurt the Economy 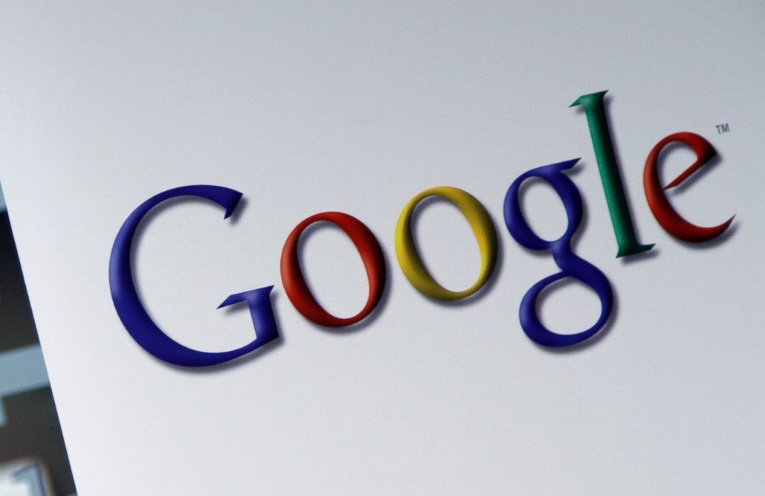 Google hit with record fine by EU, told to change its ways 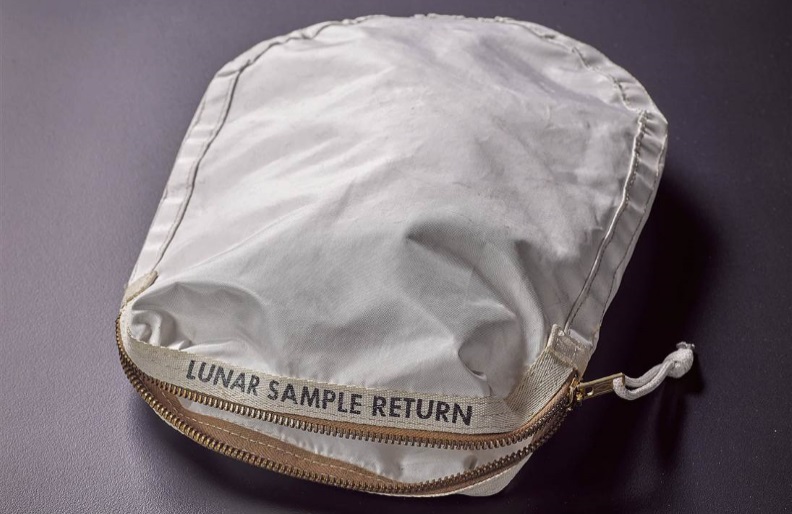