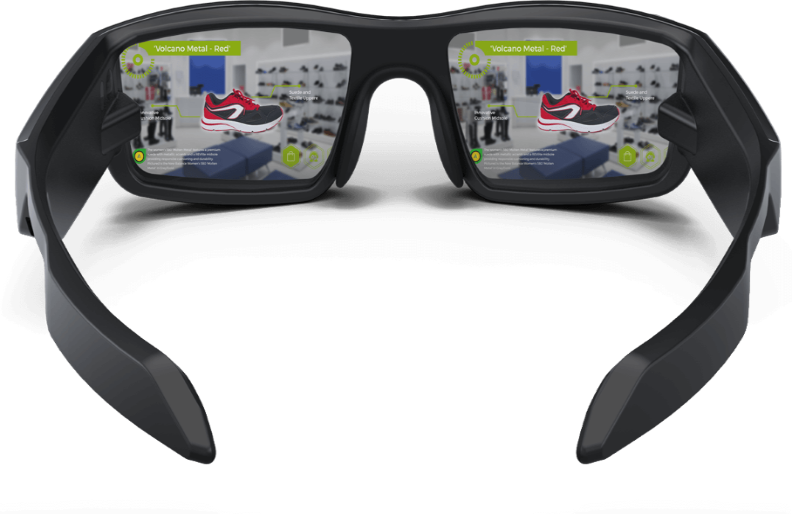 The magic of augmented reality is that we can don a pair of glasses and see things other people cannot see, overlaying the world we live in with holograms and virtual objects and allowing us to see abstract ideas visually. But with the singular exception of the hit mobile game “Pokemon Go,” AR’s introduction to the public has been slow, using mobile phones to provide “windows” into that other reality via limited forays into entertainment and journalism.

This year will reveal how soon and how much that will change, but the direction, at least, is already clear.

“We know what we really want: AR glasses,” Oculus Chief Scientist Michael Abrash said at Facebook’s F8 developers’ conference in April. “They aren’t here yet, but when they arrive they’re going to be the great transformational technologies of the next 50 years. Instead of carrying stylish smartphones everywhere, we’ll be wearing stylish glasses.”

However, these glasses do not exist yet in mass production. Currently, the primary way that the public and business users experience AR is through mobile devices. Right now, multiple businesses are pushing to become the first to market with those glasses and 2018 will likely become the battleground for the first generation of these devices – although they will probably be goggles and not spectacles at least in the beginning.

On the hardware side, the market from 2017 is shaping up around wearable mobile virtual reality headsets that can double as AR headsets. Microsoft Corp. calls this “mixed reality,” and the technology underlies the development of Microsoft’s groundbreaking AR headset HoloLens. Although HoloLens is an amazing AR experience, it’s not yet available to the public.

So instead we need to look to Vuzix Corp. and the Vuzix Blade Smart Glasses (pictured) revealed at the Consumer Electronics Show this month. But they won’t be available to consumers until later this year, and they’ll cost about $1,000 apiece — hardly a mass-market item.

No doubt Microsoft, Facebook’s Oculus VR and HTC Vive are all working steadily on mobile AR glasses, but it seems more likely for now that we will see them focus on mobile VR headsets – such as the Oculus Go and Vive Focus – that can double as AR devices using forward cameras. We can expect that AR in 2018 will focus on mobile devices and that any killer apps will rise out of that use case.

Looking at past years, it’s most likely that entertainment, social media and marketing will be the hottest contenders in the industry. The launch of “Pokemon Go” in 2016 provided considerable insight into where AR might go in 2018. Niantic Inc., maker of a number of AR games, tapped into the social interest surrounding collecting cute animated animals and earning achievements by bringing it into the “real world” with augmented reality. But 2017 did not see any similar breakthrough games.

Niantic is not sitting on its laurels, however, and it plans to launch an AR game based in the Harry Potter universe in partnership with Warner Bros. Entertainment Inc. It’s probably not a stretch to expect that the fantasy world will be at least as popular as the world of Pokemon. As a result of that game, Adam Fingerman, co-founder and chief executive of ArcTouch, told Mobile Marketer, “2018 will finally be the year that augmented reality is understood.”

Partly that will be the result of more capable tools for creating AR experiences. Last year, Google Inc. and Apple Inc. also released AR development kits for their phones, ARCore and ARKit, respectively, as well as AR Studio). The availability of these tools for more app developers means a much higher likelihood that a killer app might arise.

The problem is attempting to assay what part of the market it might arrive from. Smartphones are already a large part of how people learn about and understand the world around them. And AR can provide yet another layer to knowledge acquisition, prompting users to point their phones at something to get more information. That’s a powerful use case for AR – especially for marketing. 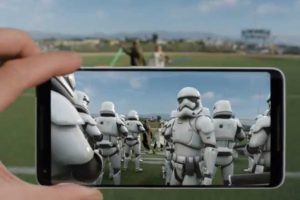 In 2018, the adoption of AR development kits for major smartphones means we will most likely see major brands start taking advantage of the technology more often. Already Snapchat, a photo-taking and -sharing service, has implemented AR capabilities into its app. And Google teamed up with Walt Disney Co. to allow people to insert “Star Wars” stormtroopers into their photos (right).

These are only a taste of what AR technology can do on mobile devices. Marketers and social media companies will want to opt in to the ability to connect with users by allowing them to bring popular culture into their photos and videos that they share with friends.

Although AR may mostly be tied up in individual apps, marketers will also be able to push more AR experiences by getting consumers to point their cameras at things – products and advertisements – that could then come “alive.” For example, Aurasma, an AR platform released by HP Inc., imagined that movie posters and product packaging could become a canvas for advertisement with augmented experiences.

“The next generation coming up are going to demand that augmented reality is part of how their cell phones work,” Annie Weinberger, vice president and general manager at Aurasma, said as far back as 2014. Although that day may finally soon arrive, a big obstacle will be making users realize the capability exists in their phones. That’s why Google, for instance, put AR stickers directly into its Pixel phone camera app.

Even if consumers don’t get the slick, cheap AR glasses they want in 2018, they’ll get a reasonable facsimile while they wait for the real deal.

This article was originally published by Silicon Angle.