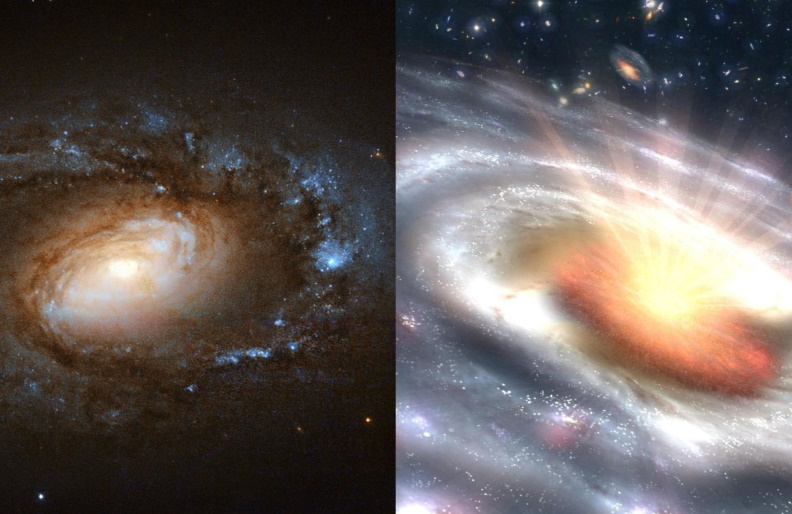 Normally things happen slowly out in space. It can take thousands, millions or even billions of years for stars and galaxies to evolve. But now astronomers have spotted an event that was thought to happen over millennia play out in a matter of months, as a usually-quiet galaxy suddenly fired up into an energetic quasar – and not just once, but in six different cases.

The galaxies in question started off in a class known as low-ionization nuclear emission line region (LINER) galaxies. Accounting for about a third of the galaxies in our neighborhood, these LINERs are characterized by mild activity in their center (or nucleus) – more than you’d see in a galaxy like the Milky Way, but far less than a blazing quasar.

Existing theory says that quasars should take thousands of years to fire up, but now, astronomers have witnessed it happening live, right before their eyes. And it wasn’t just a one-off event either – six different LINER galaxies were seen to suddenly roar into quasars, within the first nine months of observations by the Zwicky Transient Facility (ZTF).

“For one of the six objects, we first thought we had observed a tidal disruption event, which happens when a star passes too close to a supermassive black hole and gets shredded,” says Sara Frederick, lead author of the study. “But we later found it was a previously dormant black hole undergoing a transition that astronomers call a ‘changing look,’ resulting in a bright quasar. Observing six of these transitions, all in relatively quiet LINER galaxies, suggests that we’ve identified a totally new class of active galactic nucleus.”

To get a better understanding of what’s going on, the team peered closer at the six weirdos using the Discovery Channel Telescope. This shed new light on the new quasars – specifically, how their nuclei shed light on the surrounding dust and gas. Perhaps unsurprisingly, it was only the material closest to the center that was lit up in the new quasars, while older ones are known to illuminate wider areas. This might happen in time.

The team also found that LINER galaxies can host larger black holes than previously thought. Current theories can’t explain exactly how the transition occurred so fast, and the team says that these will probably need to be completely revised. Further study should reveal more details about the life cycle of quasars, and galaxies in general.

“Our findings confirm that LINERs can, in fact, host active supermassive black holes at their centers,” says Frederick. “But these six transitions were so sudden and dramatic, it tells us that there is something altogether different going on in these galaxies. We want to know how such massive amounts of gas and dust can suddenly start falling into a black hole. Because we caught these transitions in the act, it opens up a lot of opportunities to compare what the nuclei looked like before and after the transformation.”