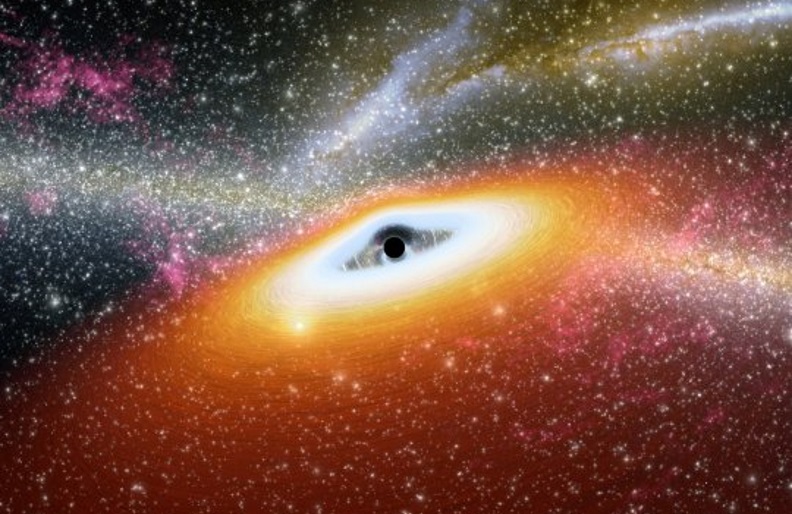 Black holes occur when a massive star dies and collapses with enough gravity that nothing, not even light, can escape from it. Black holes can absorb the surrounding mass and grow – eventually turning into supermassive black holes that can lie at the center of galaxies. Now a team of Indian astronomers believe they’ve found a black hole spinning at a rate that’s close to the maximum possible speed it can go. They first noticed it from X-rays that were picked up by India’s first ever dedicated astronomy satellite, called AstroSat.

The X-rays were coming from a binary star system called 4U 1630-47 that contains the black hole, which is about 10 times the mass of our sun. As gas, dust and other matter were absorbed by the spinning black hole, the research team figured out it was spinning fast enough to suck up all the space around it. ‘As black holes get created, mass and spin rate are two properties that characterise them,’ Sudip Bhattacharyya of TIFR, and principal investigator of Astrosat’s Soft X-ray Telescope (SXT), told Hindustan Times. ‘Mass can be measured more easily as it has a long-range effect because of gravity as the black hole gets created,’ he added. According to Einstein’s theory of relativity, a rapidly spinning black hole makes space itself rotate.

This effect, coupled with gas spiraling toward the black hole, can produce a rotating, tightly wound vertical tower of magnetic field that flings a large fraction of the inflowing gas away from the vicinity of the black hole in an energetic, high-speed jet. And the team believe this particular black hole is spinning almost as fast as it’s possible to do so. Including the black hole discovered by the AstroSat, there are only five black holes that have accurately measured high spin rates. Even if you’re not taking spin rates into account, this black hole is one of only 20 others that have been spotted in the Milky Way galaxy.

Measurements, especially of the spin rate are very difficult to make, and can be done only by high-quality X-ray observations in the correct state of the binary stellar system, in which the black hole is a gobbling matter from its companion star,’ said the lead author Mayukh Pahari.

The research, which was a joint effort between the USA and India, has been accepted for publication in The Astrophysical Journal.