Learning From the Past

Humans are naturally inclined to think towards the future. We find ourselves wondering about the next steps in our lives, imaging the potential consequences of advances today, even fictionalizing them to their most extreme forms as a sort of sandbox for possible futures.

Scientists might be one of the few groups to actively suppress that desire to predict the future. Conservative and data-driven by nature, they might be uncomfortable making guesses about the future because that requires a leap of faith. Even if there’s a lot of data to support a prediction, there are also infinite variables that can change the ultimate outcome in the interim. Trying to predict what the world will be like in a century doesn’t do much to improve it today; if scientists are going to be wrong, they’d rather do it constructively.

Indeed, the world has changed a lot in the past 100 years. In 1918, much of the world was embroiled in the first World War. 1918 was also the year the influenza pandemic began to rage, ultimately claiming somewhere between 20-40 million lives — more than the war during which it took place. Congress established time zones, including Daylight Saving Time, and the first stamp for U.S. airmail was issued.

Looking back, it’s clear that we’ve made remarkable strides. Today, it’s rare to die from the flu, or from a slew of other communicable diseases that were once fatal (such as smallpox, which was eradicated in 1977). That’s mostly due to the advent of prevention tactics such as vaccines, and treatments like antibiotics.

The pace at which technology is evolving can feel dizzying at times, but it’s not likely to slow down anytime soon. Here are some of the ways we suspect the technology of today will shape the world in the century to come.

Quantum Computing Will Come Of Age

As the internet transformed society over the past few decades, quantum computing will forever alter our view of the world and our place in it. It will give us the capacity to process more data about ourselves, the planet we live on, and the universe than has ever before been possible.

No one is totally sure yet what we’ll do with that data. We’ll likely find some answers to longstanding questions about physics and the universe, but it’s also likely there are answers to be found that we don’t even have the ability to fathom.

We may not even have to wait a century to have our brains fully integrated with our devices, as research into brain-computer interfaces (BCIs) is now firmly out of the realm of science fiction. Early prototypes have already helped patients recover from strokes and given amputees the ability to experience touch again with the help of a sensor-covered prosthesis. If and when they become commonplace, the human-machine mashup could irrevocably alter the course of human evolution. Prototypes for non-invasive BCIs in which electrode arrays pick up brain signals through the skull are already in development, and may serve as stepping stones toward the full-on “brain mesh” proposed by Elon Musk.

We’ll Zoom Around Our Revamped Cities in Autonomous Cars

The world of 2118 will have improved infrastructure and better ways of getting around. Our automobiles are becoming smarter and greener; by 2118, there’s a good chance that electric cars will be able to drive themselves, along with those most in need. The current consensus in the automotive industry is that fully autonomous vehicles are still theoretical at best (and may not be possible at all), but Tesla alone aims to achieve so-called level 5 autonomy — a world in which our cars would drive us — by about 2019.

In some parts of the world, cities themselves are also becoming more sophisticated. In China, a solar-powered highway could one day charge electric cars as they drive. Cities of the future could also fix themselves — engineers today are busy designing self-healing concrete structures and potholes that fill themselves.

AI Will Change How Humans Work

In the decades to come, technology that’s changing our homes, our devices, and our vehicles is also going to change our lives in other major ways. Artificial intelligence (AI) will almost certainly automate some jobs, particularly those that rely on assembly lines or data collection. To offset the unemployment of human workers that would result from automation, some nations may adopt a universal basic income (UBI), a system which regularly pays citizens a small stipend with no requirement to work.

Indeed, some places have already begun small-scale experiments with UBI, and a report from the Roosevelt Institute in November 2017 predicted the U.S. could see a $2.48 trillion increase in the nation’s GDP within just eight years if it implemented UBI.

In some fields, such as medicine, robots probably won’t completely replace humans. The more likely scenario, some experts predict, is that AI will continue to augment the work experience for humans — even augmenting us physically. AI technology has already been paired with wearable exoskeletons, giving factory workers superhuman strength — perfect for those whose jobs require heavy lifting, which could increase their risk of job-related accident or injury. 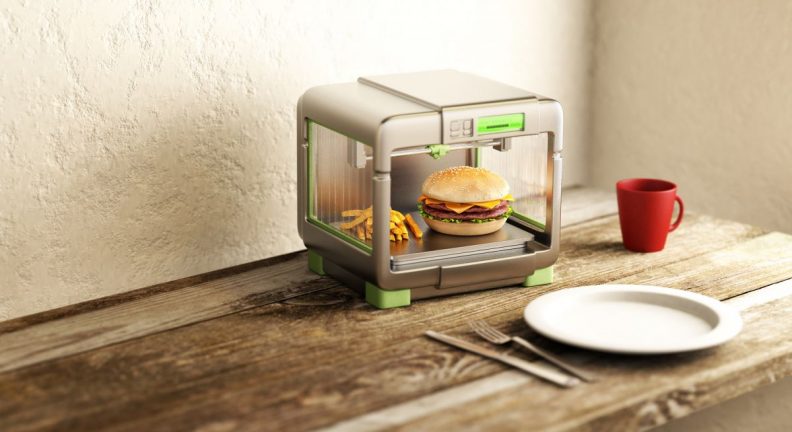 3D printers are already being used in labs around the world and, increasingly, by consumers. While the printers may be costly up front, they are often seen as a long-term investment, since they can often print their own replacement parts.

As 3D printers become capable of printing everything from viable organs to buildings, we’ll likely find use for them in different aspects of our lives, as well as many different fields of industry.

Medicine Gets a High-Tech Upgrade

New procedures, aided by technological advances, are poised to transform medicine. Using a precision medicine approach (which uses a patient’s genetic data, lifestyle, and environmental surroundings to inform treatment), scientists are developing treatments for cancer that are tailored to an individual patient’s genes.

Oncology is not the only area with potentially life-saving (or in some cases, life-giving) applications; the evolution of reproductive medicine has already begun right before our very eyes. In 2017, researchers grew lamb fetuses in what could be the first prototype of an artificial womb, one woman gave birth after a uterus transplant for the first time, and another to a baby that began as an embryo frozen 24 years ago. The much-hyped gene editing technology CRISPR could mean that by 2118, many genetic diseases could become a thing of the past: scientists used CRISPR to edit the gene for a fatal blood disorder out of human embryos. Stem cells continue to prove useful for developing novel treatments, even for conditions that were once believed to be untreatable.

A century from now, major diseases such as cancer, immune and inflammatory disorders, and genetic conditions “will very likely be long gone by either prevention or effective therapy,” Phil Gold, a professor at the McGill University Clinical Research Centre, told Futurism.

But that’s not to say we’ll live in a future of perfect health — external factors, from global warming to infectious diseases and even warfare, could depress the life expectancy of people in 2118.

The good news is, diagnostic technology is also dramatically improving. Shu Chien, bioengineer and winner of National Medal of Science at the University of California, San Diego, told the San Diego Tribune that he predicted that scientists would invent Star Trek‘s famous medical tricorder, capable of “non-invasive early detection of cancer,” in the next century. He’s not the first to make the prediction over the last few decades, but this time could be different: Science and technology have delivered on some other sci-fi tech, such as super-materials and object replicators.

The Planet Will Get a Lot Hotter

Climate change is already transforming our world. One 2015 study predicted that Greenland’s usually cold summers could become completely ice-free by 2050. Extreme weather events are becoming more frequent and fatal. The world’s sea levels are on track to rise 2 to 3 feet (0.6 to 0.9 meters) by 2100, which could displace up to 4 million people worldwide.

Earth is in the midst of a climate crisis that will not improve without deliberate and sustained action.

Over the past few decades, that progress has been slow. When it was developed in 2015, the Paris Climate Agreement aimed to limit global warming to 2.7 degrees Fahrenheit (1.5 degrees Celsius). Recent research from the University College of London revealed that we could have a 66 percent chance of hitting the 1.5-degree C target in 2100 — but we’d need to limit our carbon pollution to 240 billion tons to pull it off. Hopefully we will be able to quit our carbon habit over a longer period of time instead of making drastic cuts immediately, which would not be an easy feat to achieve in either the technical or political sense.

In the U.S., one of the biggest carbon contributors in the world, some fear we’re not doing our part. In June, President Trump withdrew the United States from the Paris Climate Agreement. In an interview with Futurism last year, Al Gore said the Trump administration’s environmental policies are “reckless and indefensible.”

But he is not devoid of hope. Gore told Futurism that he believes in the strength of the grassroots movement toward a more sustainable future, and that “we can and will win” the fight if we stay committed to the cause.

If humanity wants to remain on Earth, it’s a cause worth fighting for. We are beyond the point of preventing it from happening, but we can take steps to slow it down.

Humans Will Explore Our Solar System and Beyond

Although we’ve made monumental progress since 1918, we are still endlessly fascinated (and vaguely terrified) by the prospect of what might exist in space. Over the next century, perhaps nothing will thrill, challenge, and transform humanity more than the advances we make in space exploration.

Big-idea people, from Elon Musk to Donald Trump, are loudly planning to send humans to Mars and beyond, potentially setting up colonies on the Red Planet in the next century. One hundred years is not a long time to prepare for such a move, however, especially when we’re still not that sure what our living situation would be on Mars. While terraforming may allow us to adapt the planet to better suit our needs, we still have to get there first.

First, we’ll catch a better glimpse of distant celestial bodies through increasingly powerful infrared telescopes here on Earth. As space travel becomes more affordable (and even a tourist destination), we’ll be able to use what we see from down here on Earth to traverse the universe. The biggest question is, what — or who — might we meet when we do?

“By the year 2118, extraterrestrial life won’t be news but historical fact,” Jaymie Matthews, astrophysicist and professor at the University of British Columbia, told Futurism. “What’s harder to predict is how humanity will respond, and adapt, to knowing we are not alone in the Universe. Will it make us humbler? (“We are one of many.”) More arrogant? (“We are the peak of evolution in the Galaxy.”) More fearful? (“Microbes are just the tip of the alien iceberg. And Earth is the Titanic!”) Or will it help us to better understand and appreciate our own origins?”