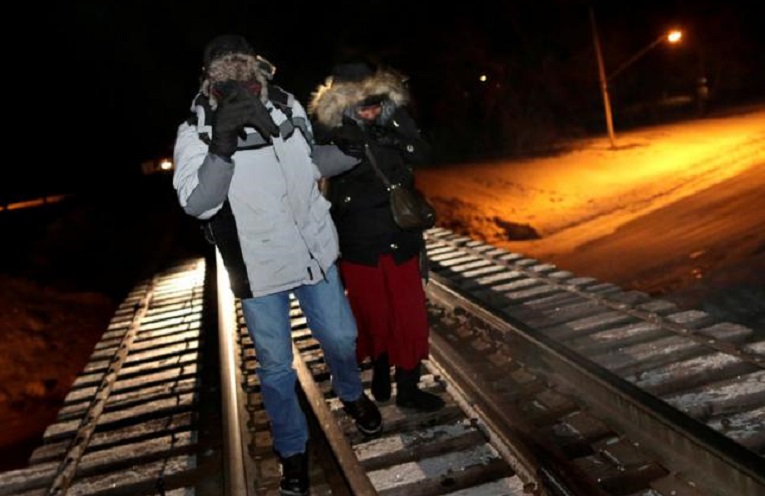 Somali-born Abdulrahman Mohamed was a social worker in Grand Forks, North Dakota, for three years. He had a U.S. work permit and earned a promotion while waiting for his asylum claim to be heard.

He had an apartment and was sending $350 a month to family in a Kenyan refugee camp. That changed in January. Mohamed and three friends with pending asylum claims were told to meet with an immigration officer to discuss their cases. When his friends went to their meetings they called him to say they had been detained. He has not heard from them since.

“I started thinking, if I go in, what will happen to me?” said Mohamed, 30, who now lives in a Salvation Army homeless shelter in Winnipeg, Manitoba. “I had everything. I had a life. I never thought about coming to Canada, to be honest with you.”

U.S. immigration officials told Reuters that without more specific personal details about Mohamed’s three friends they were unable to confirm his account.

Mohamed crossed illegally into Canada on the night of Feb. 19 after being driven close to the border and then walking six hours across snow-covered open ground with a friend.

Mohamed and his friend are not alone in making the journey northward. Since Jan. 1, several hundred people, mainly from Africa and the Middle East, have defied wintry conditions to cross illegally into Canada, fearing they will be ensnared in U.S. President Donald Trump’s more aggressive effort to crack down on illegal immigrants.

What has not been entirely clear until now is who is among this group going north. Reuters interviews with Mohammed and nearly two dozen others show that some of those crossing into Manitoba, are from East Africa – Somalia, Djibouti and Eritrea. Others, including from Yemen and Syria, are crossing illegally into Canada at other points.

Some of those now fleeing the United States originally moved there to escape what they said was persecution in their homelands. Reuters could not independently verify their stories.

Those interviewed typically fit into three categories: some had pending U.S. asylum cases but feared being detained anyway, others had been denied asylum but still had work visas, while a third group flew into the United States on visitor visas and immediately crossed the border into Canada illegally.

Three had failed asylum claims and criminal records that virtually guaranteed their removal under U.S. law.

Few of those Reuters spoke to were undocumented workers, who are the main focus of Trump’s stepped-up efforts.

Canadian police say 183 people have crossed illegally into Manitoba since Jan. 1. Hundreds more are believed to have entered Quebec and British Columbia, according to refugee groups and media reports, although there is no firm data on exactly how many.

The flow of migrants to Canada from the United States pre-dates Trump’s election, and is partly due to Prime Minister Justin Trudeau’s welcome of refugees. But the numbers going northward have accelerated since the first week of February, according to Canada’s public safety minister.

“I CAN’T GO BACK TO SOMALIA”

To be sure, former U.S. President Barack Obama also cracked down on illegal immigrants and was dubbed the “deporter in chief” by some dismayed migrant advocates after he expelled more than 400,000 people in 2012, the most by any president in a single year.

But under Obama, failed asylum seekers who had no criminal records and were from countries deemed dangerous, like Somalia, were not a priority for deportation. They were allowed to work and had to report regularly to an immigration office.

Trump has signaled a much tougher approach – he wants to widen the net to include these asylum seekers, among others.

Yussif Abdullaahi, a failed U.S. asylum seeker worked at a manufacturing plant in St. Cloud, Minnesota, before he was told at his check-in to prepare for deportation by April 5 or be detained.

“I did not want to abandon my work, but I was worried,” he said. After two years in the United States, he left for Canada, giving his car and personal belongings to his brother.

Mohamed Daud, 36, left his wife and four step-children – some of whom have green cards making them legally permanent residents, or were born in the United States – and quit his job at a meat-packing factory in Grand Island, Nebraska for Canada, two days ahead of a March 1 check-in with immigration officials.

The asylum seekers interviewed said they feared being killed if they returned to their home countries, either by the government or militant groups like al Shabaab.

Many of those housed in shelters in Winnipeg have one thing in common: they congregated in Minneapolis, Minnesota, to take advantage of a little reported modern-day Underground Railroad, spread through word of mouth and social media, that lays out the path to Canada.

Minneapolis is 650 kilometers (400 miles) from one of the main illegal crossing points into Canada, the town of Emerson in Manitoba.

Ibrahim, 27, who said he was afraid to give his last name, lived with his U.S. citizen brother in Seattle and worked as a cleaner. When rumors of raids began to circulate in February, he fled. Instead of making the two-hour car trip to the border with British Columbia, the nearest Canadian province, he bussed halfway across America to Minneapolis.

“In Minneapolis, people know how to do it,” he said.

Those interviewed said the path from Minneapolis typically begins with a connection to drivers, usually Somali friends of friends who have often driven to North Dakota, and know the back roads and unwatched bush trails to Canada.

The driver sets a time for departure – typically mid-afternoon in order to reach U.S. border towns across from Manitoba under cover of darkness – and tells travelers to arrive, cash in hand, at a designated spot.

Up to six asylum seekers, often unknown to each other, may pack into a vehicle, each paying between $600 and $1,000, for a silent journey to North Dakota. The drivers typically forbid conversation and give out little information about themselves.

Abdullaahi, the St. Cloud manufacturing employee, said his drive to North Dakota was fraught with anxiety.

“Every time the driver stopped to pick up someone or slowed down on the highway, my heart jumped. ‘What is happening? Why is he stopping’,” he said.

After they have been dropped off, sometimes 20 miles (32 km) from the border, they crunch across snowy fields. Once in Manitoba, asylum seekers phone Canadian police, who take them to the government border office to file claims.

Refugee agency staff then take the migrants to Winnipeg to find housing while they await immigration hearings, usually within two months, that will determine if they can stay.

Mohamed, the social worker from Grand Forks, is among those now waiting to hear his fate. Despite leaving behind a life that he had built over three years, he has few regrets about his trek north to an uncertain future.