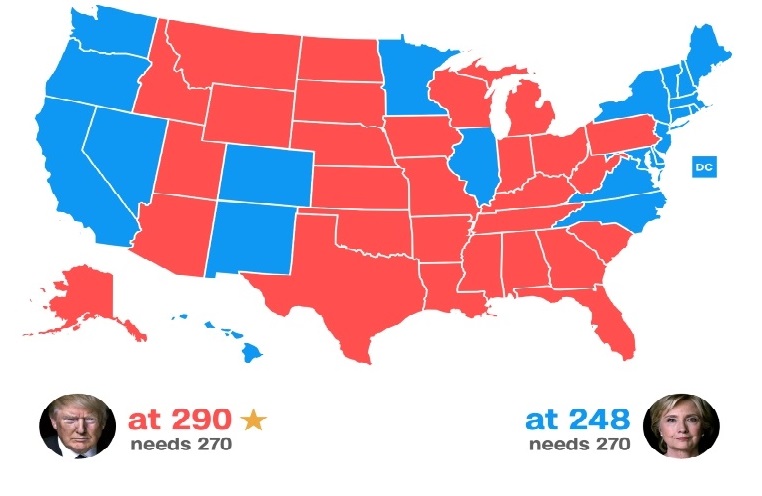 Here’s a look at some scenarios in which Trump could get to 270 electoral votes:

This one, according to polls, is probably Trump’s best bet — but it’s also one in which he has no margin for error.
Trump could carry every state Mitt Romney won in 2012 (including North Carolina) and flip the Barack Obama states of Florida, Ohio, Iowa, Nevada and New Hampshire.
How tight would this path be? So tight that Trump would also have to lock up Nebraska’s Omaha-based congressional district and Maine’s rural district to get those single electoral votes. This map places him at exactly 270, without a single electoral vote to spare: 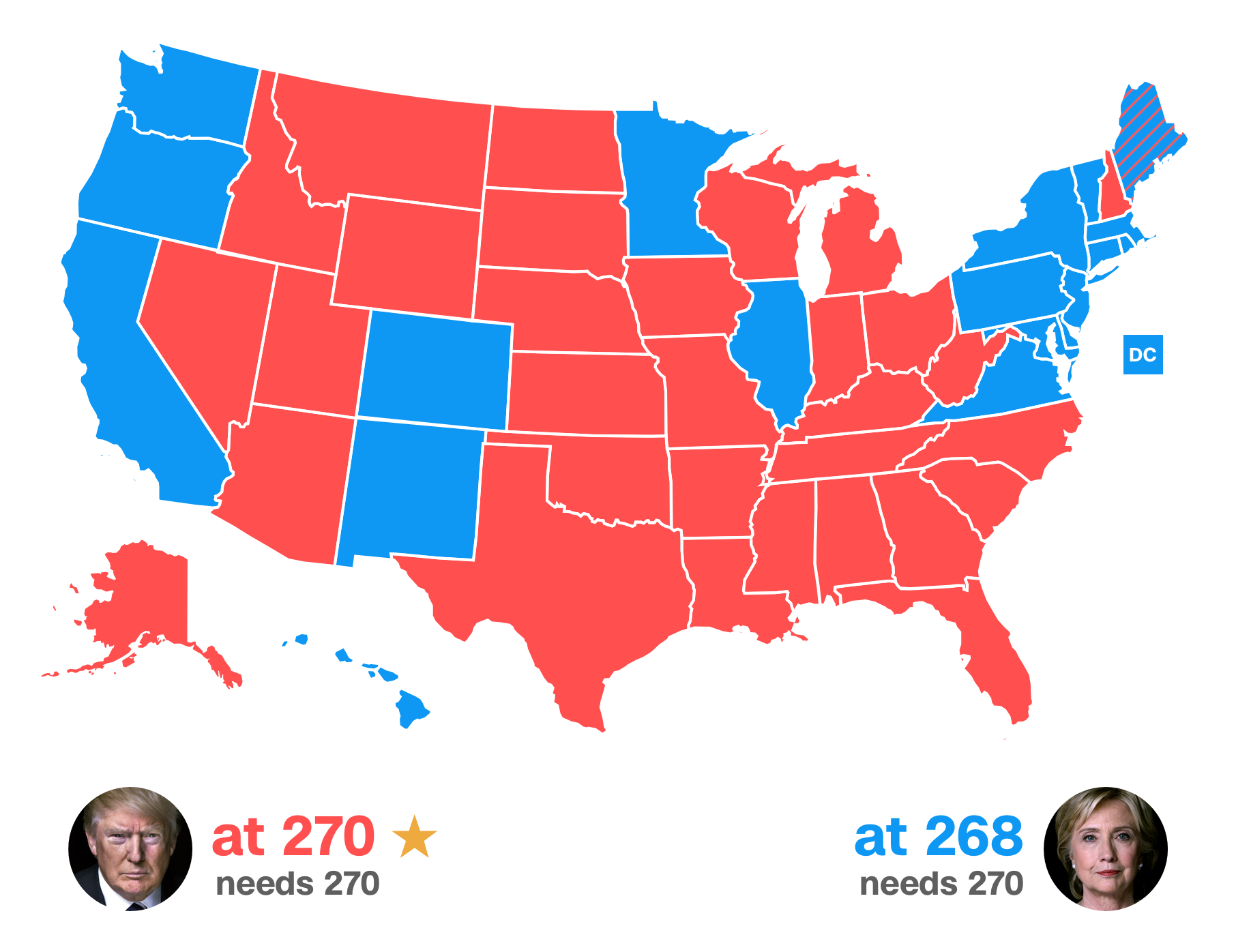 This is Trump’s dream scenario, because it cracks Clinton’s blue wall of Wisconsin, Michigan and Pennsylvania — which he hasn’t been able to win in polls.
In this map, Trump doesn’t need to sweat tight races in Nevada or New Hampshire. As long as he locks in Florida and Ohio, he could afford a fumble like North Carolina, as well: 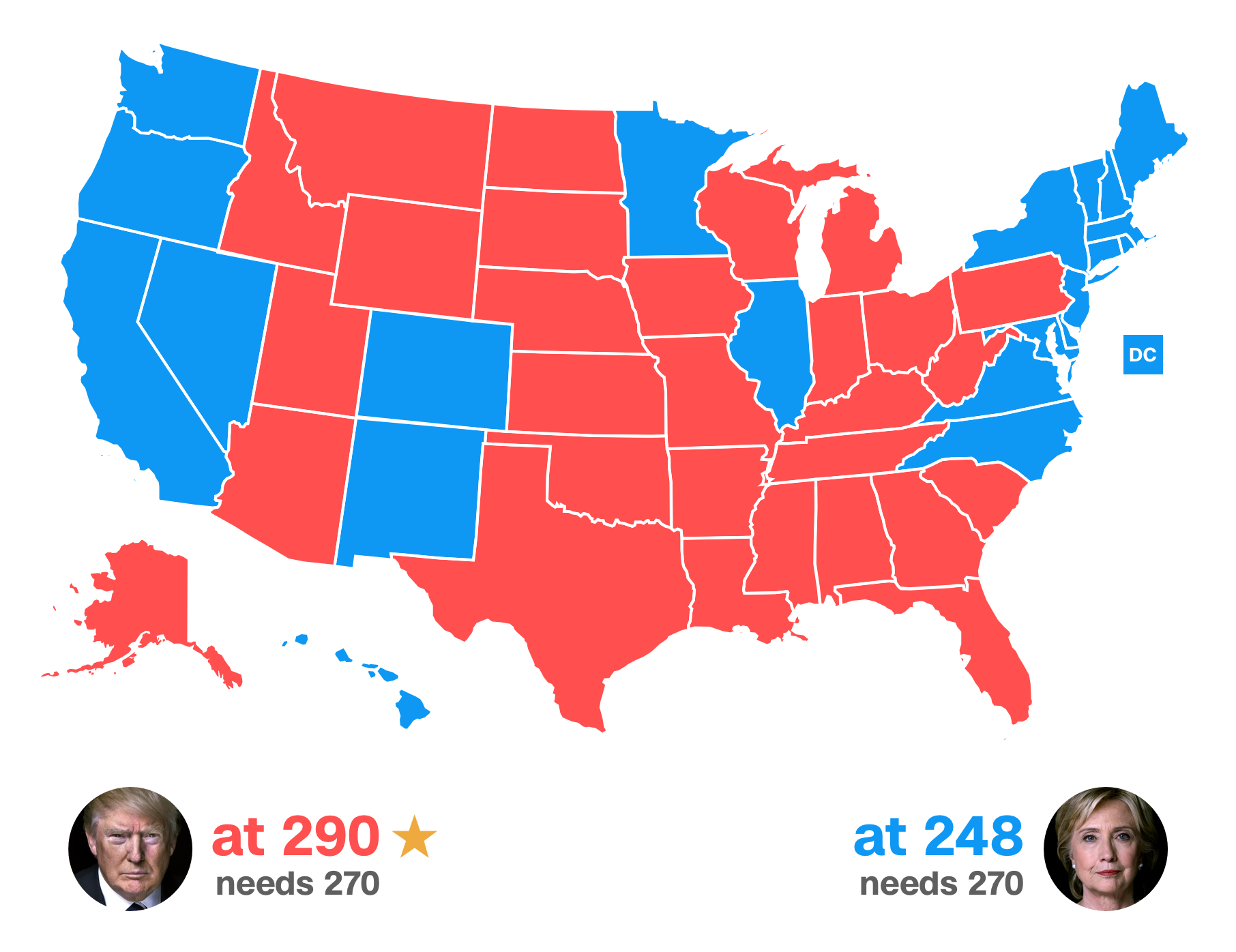 Three smaller, fiercely independent states could tip from Clinton’s column to Trump’s if she loses many of the Republican-leaning voters who just aren’t comfortable with Trump — not to the GOP nominee, but to Libertarian Gary Johnson.
Those states are Nevada, New Hampshire and Colorado — all places where Johnson has beaten his poll numbers from big swing states — and they’d be enough for Trump to win: 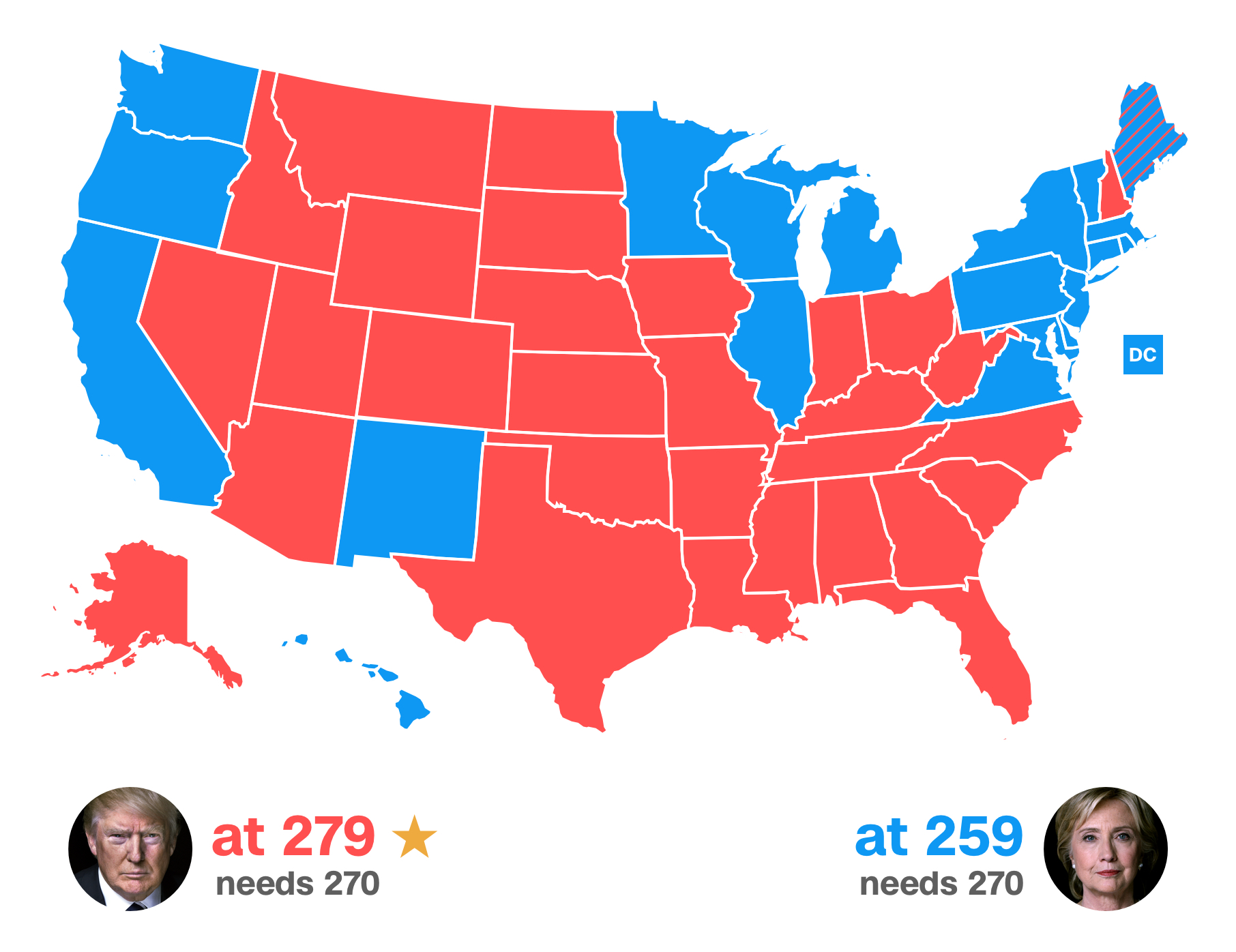 There are signs in the early vote numbers from North Carolina, Florida and Georgia that fewer black voters (who typically back Democrats) are turning out compared to previous election cycles — resulting in whiter electorates.
That would help Trump in those three states — and could boost him in Michigan, too, where much of the Democratic vote comes from African-Americans in cities like Detroit and Flint: 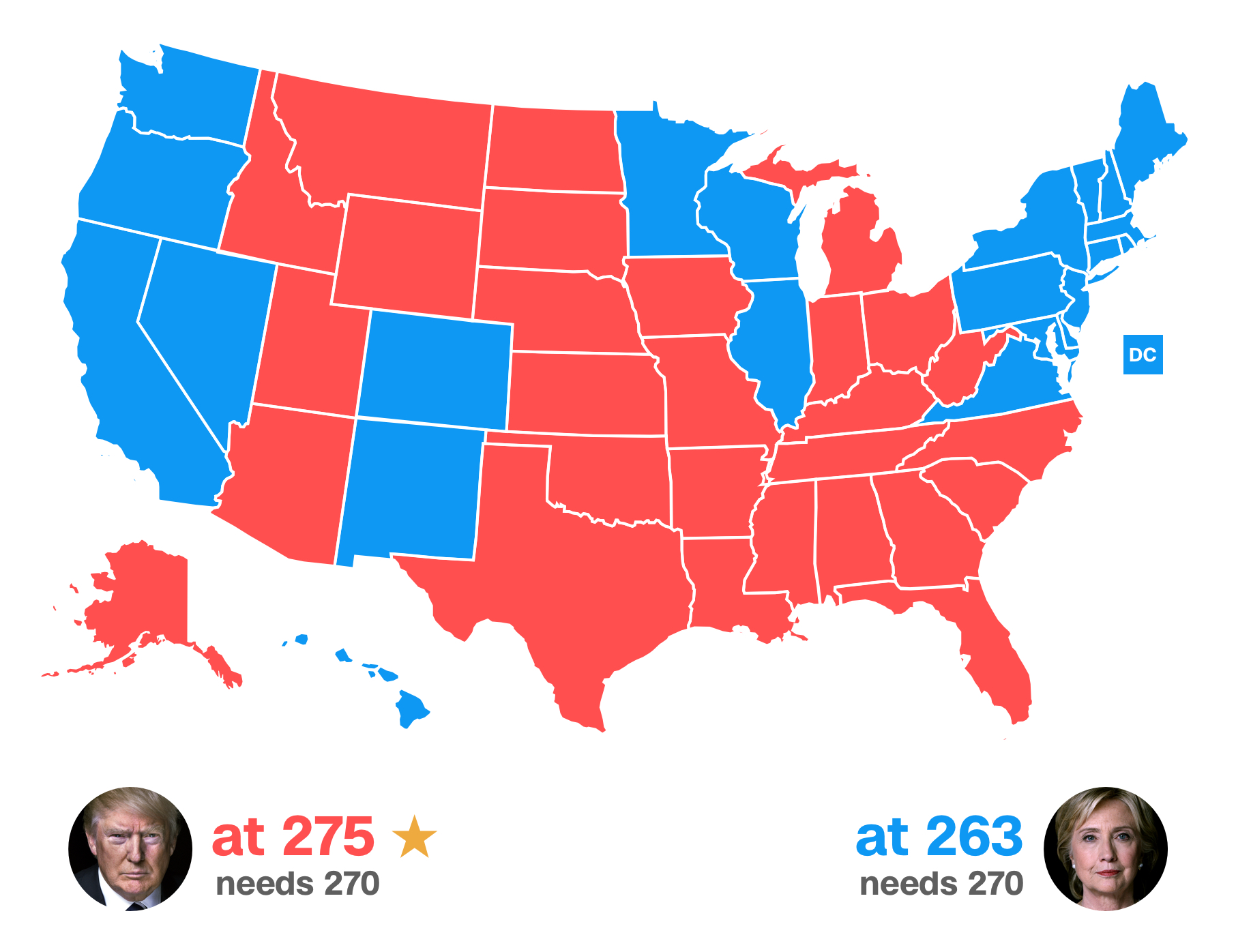 If Latinos don’t vote as expected

All of a sudden, the West could become much more competitive — with Trump securing Arizona and having a chance at flipping Florida, Nevada, Colorado and New Mexico.
This scenario would also lock up Florida for Trump, and would allow him to forget about New Hampshire: 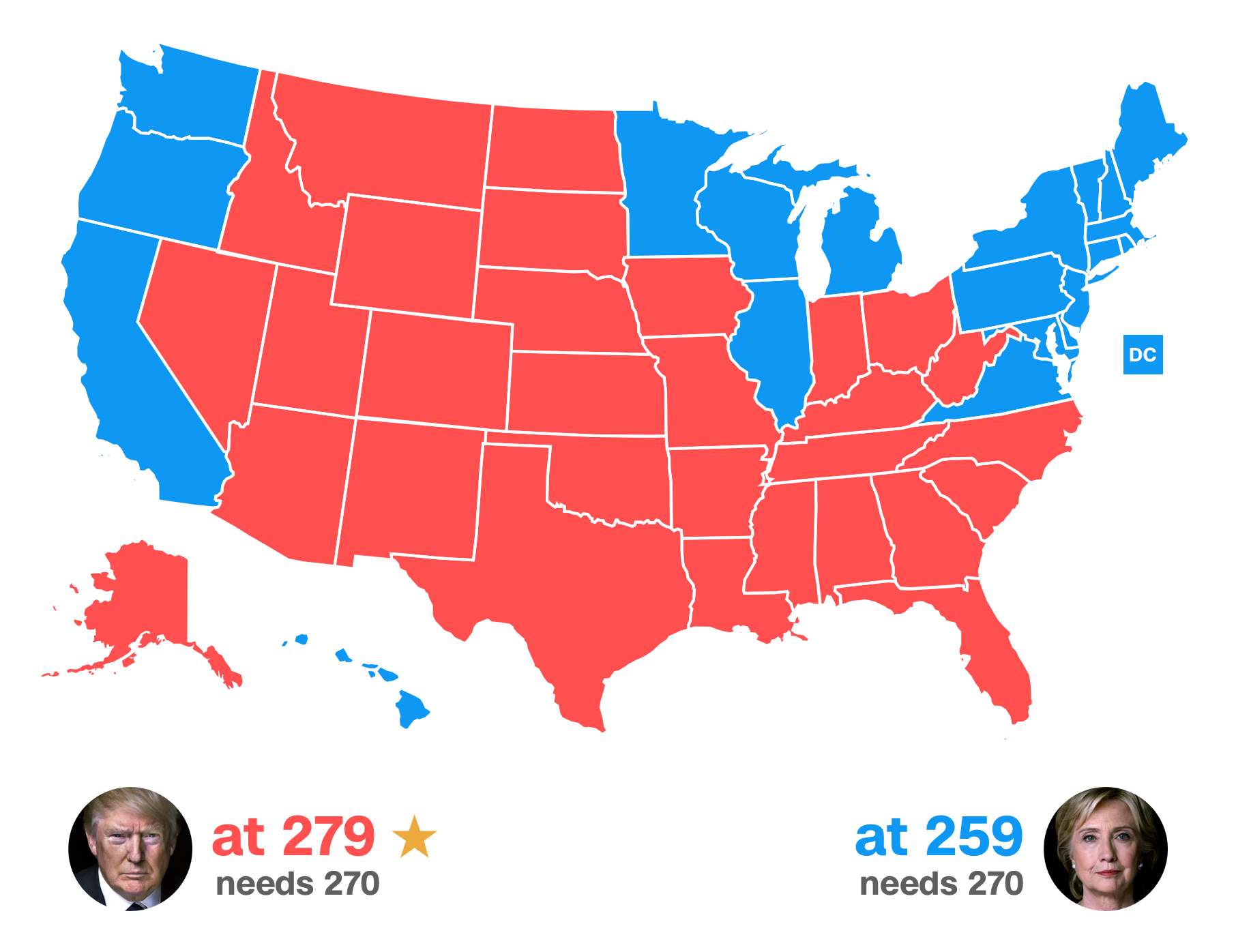 If the Northeast loves Trump

Forget Maine’s Second District — perhaps Trump can flip the whole state. And he could take New Hampshire with him.
In this scenario, Trump would vastly outperform expectations among suburban, middle-class voters — and win the election’s biggest prize of all: the Philadelphia suburbs: 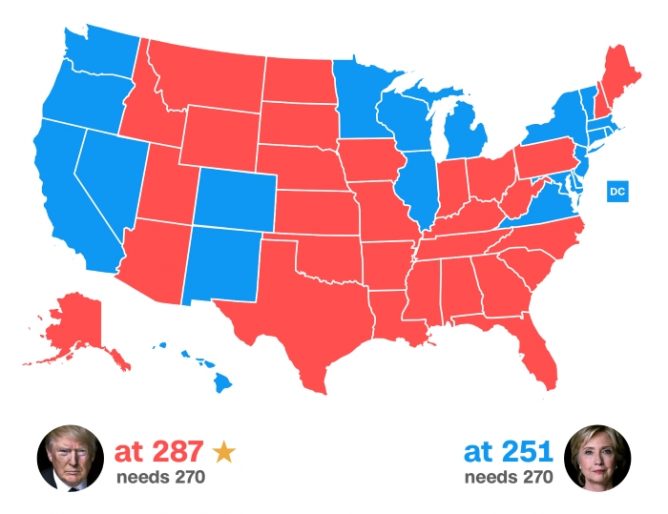