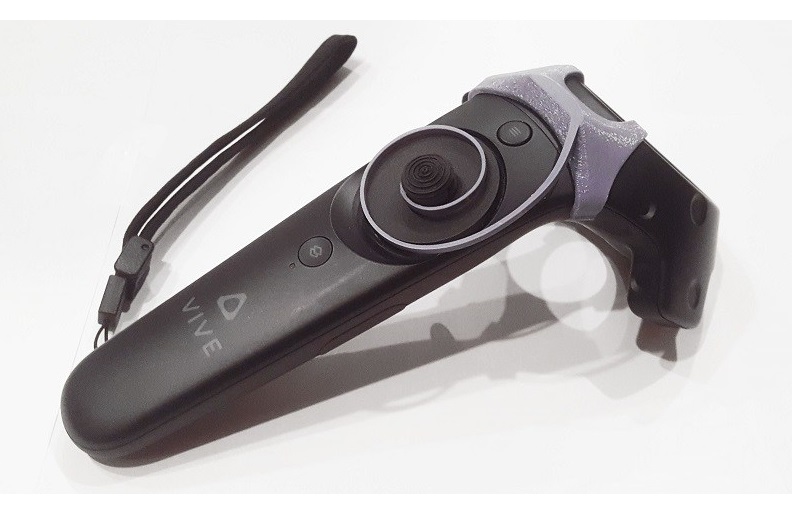 A few days ago, this post showcasing 3D-printed thumbsticks for the HTC Vive controllers rocketed to the front page of Reddit. While the Vive controllers offer excellent positional tracking, they use a variant of Valve’s Steam controller touchpads rather than traditional joysticks. The divisive touchpads have caused many users to clamor for a joystick solution similar to Oculus’ Touch controllers, and that’s where this 3D-printed joystick mod comes into play. Considering we have access to a 3D printer, we decided to print and try it out ourselves.

Creator and Reddit user Eisenmeower posted open-license STL files of his joystick mod on Thingiverse, so you can download and print it yourself. In addition to the standard PLA+ material that you’ll need for the frame of the mod, you’ll need a conductive PLA material for the actual thumbstick portion of the peripheral, which attaches to the frame. The conductive material allows the thumbstick to track on the touchpad where your thumb would naturally reside. We used Proto-pasta CDP11701 Conductive Carbon PLA 1.75 mm filament as our conductive material.

One issue you’ll notice after you print out the device and attach it to the Vive controller is that its highly flexible PLA frame means you can potentially push the joystick off the touchpad if you’re applying too much force in any one direction. Furthermore, when you release the joystick when it’s off-center, it can take a second to wiggle back to center. Fortunately, we didn’t notice this causing any judder in any of the games we played with it.

Another important aspect of the joystick mod is that unlike traditional joysticks, it does not have a central fulcrum. This means that it’s designed to slide across the touchpad, which can take a short adjustment period.

The first thing we did to test the mod was to navigate up and down Valve’s SteamVR menu. This was problematic because it doesn’t hold its scroll when you slide the thumbstick up and down, and that’s because the touch pads are designed so that you’re supposed to constantly swipe at it with your thumb.

It fared much better when we used it in games that had artificial locomotion options. For instance, in Fallout 4 VR, Onward, and Arizona Sunshine, we could hold the thumbstick forward to appropriately move forward. We could also move the thumbstick side-to-side to strafe. It doesn’t feel as refined as the Oculus Touch’s stick, but it surprisingly works better than the Vive’s default touchpad for these movements. It does have its shortcomings, however. When we tried it in VRChat to move our third-person avatar around the environment, it felt janky and lacked precision.

Another gripe we had with the mod was that, using our Creality CR-10 3D printer, one of the two joysticks we printed would constantly detach from the frame. We used super glue to hold it in place, however, and so far it’s holding up. The texture of the joystick itself offers a lot of grip and perhaps most closely resembles the N64 controller’s joystick. The rest of the frame easily snaps onto the Vive controllers and seems durable given our Hatchbox PLA 1.75 mm black filament material.

For right-handed users, we find it most optimal to use the 3D-printed attachment on the left hand for artificial locomotion movements and then leaving the right controller with the default touchpad so that you can navigate menus with your thumb. This allows you to get the best of both worlds.

The mod certainly isn’t ready for mass market adoption, and we certainly wouldn’t recommend going out and buying a 3D printer just for the joystick, but if you already own a 3D printer or know somebody with one, it’s worth a print–especially since it does have its use-case scenario in games that support artificial locomotion.