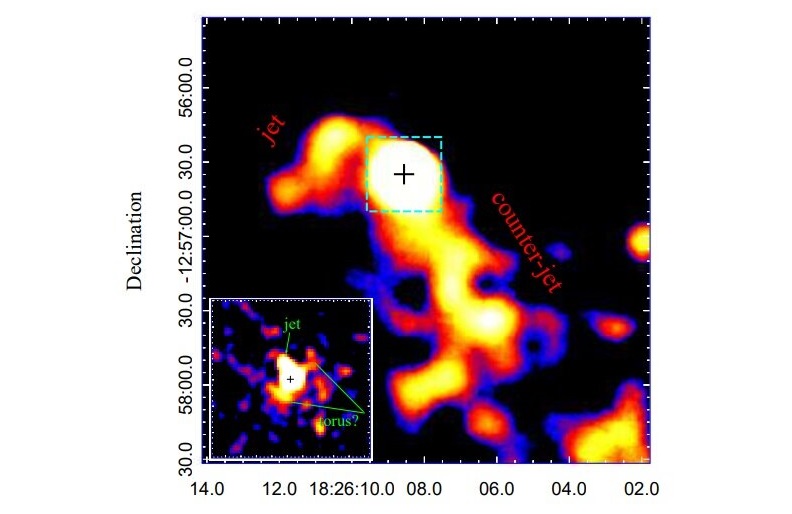 Using archival data from ESA’s XMM-Newton spacecraft and NASA’s Chandra X-ray observatory, astronomers have investigated one of gamma-ray radio-quiet pulsars known as PSR J1826−1256. The study, based on X-ray observations, sheds more light into the nature of this peculiar object and its pulsar wind nebula (PWN). Results of the research were presented in a paper published June 3 on arXiv.org.

Gamma-ray pulsars are rotating neutron stars emitting gamma-ray photons. Some of them also showcase radio emission that is often difficult to detect. This is most probably because their narrow radio beams miss the sightline towards Earth.

However, some gamma-ray pulsars are completely radio-quiet, which means that observations in other regimes, for instance, in X-ray wavelengths, are needed to learn about their properties. In particular, X-ray studies of such objects have the potential to reveal their pulsar wind nebulae (PWNe) and associated supernova remnants (SNRs), which could provide important information about pulsar parameters and interaction of relativistic pulsar winds with the ambient medium.

With that aim in mind, a team of Russian astronomers from the Ioffe Institute in St. Petersburg, Russia, led by Anna V. Karpova, decided to analyze archival X-ray data obtained by XMM-Newton and Chandra spacecraft. The target of their studies was a young and energetic radio-quiet pulsar designated PSR J1826−1256.

Located most likely some 4,320 light years away from the Earth, PSR J1826−1256 is about 14,000 years old, has a period of 110.2 milliseconds, a spin-down luminosity of around 3.6 undecillion erg/s and a surface magnetic field of approximately 3.7 trillion G. Based on these parameters, the object was classified as a Vela-like pulsar. Moreover, previous observations have shown that PSR J1826−1256 hosts a faint, but remarkably long trail-like PWN connected to the pulsar and extending south-west from it.

The new study published by Karpova’s team provides more insights into the nature of PSR J1826−1256 and a PWN associated with it.

“Here we report the simultaneous X-ray analysis of archival XMM-Newton and Chandra observations of PSR J1826−1256 and its PWN,” the astronomers wrote in the paper.

The study found that the spectrum of PSR J1826−1256 can be described by the power-law model with a photon index of about 1.0 and that the PWN spectrum becomes softer with the distance from the pulsar, what is indicative of synchrotron cooling.

When it comes to the PWN, the analysis revealed that it appears to be a mixed-type morphology nebula containing a torus, jets and a trail. XMM-Newton and Chandra images show that one of the jets is bent by the ram pressure, due to the pulsar proper motion vector not coinciding with the jet direction. The researchers noted that such geometry explains the PWN morphology and also suggests that it could be associated with a recently detected SNR candidate named G18.45−0.42.

The study also found that PSR J1826−1256 is located much farther away than previously thought. New estimates made by the team indicate that its distance to our planet is approximately 11,400 light years.