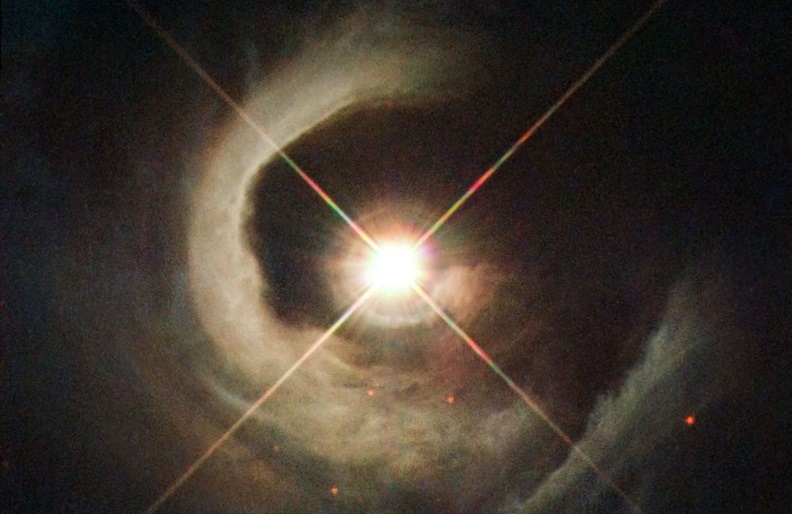 When it comes to the first galaxies, the James Webb Space Telescope will attempt to understand the formation of those galaxies and their link to the underlying dark matter. In case you didn’t know, most of the matter in our universe is invisible (a.k.a. “dark”), but its gravity binds everything together, including galaxies. So by studying galaxies – and especially their formation – we can get some hints as to how dark matter works. At least, that’s the hope. It turns out that astronomy is a little bit more complicated than that, and one of the major things we have to deal with when studying these distant galaxies is dust. A lot of dust.

That’s right: good old-fashioned dust. And thanks to some fancy simulations, we’re beginning to clear up the picture.

Let There Be Light

Galaxies first started forming a pretty long time ago, just a few hundred million years into the history of our universe. But so far we have no direct images of those first galaxies. They’re simply too far away for their light to reach us without a massive telescope. What’s more, because they are so distant and the universe has expanded since their light was emitted, they don’t glow in visible light anymore. Their light has been redshifted down to the infrared spectrum. So to have any chance at all at mapping these infant galaxies we need a large infrared telescope. Enter the James Webb.

The James Webb isn’t a survey instrument; it won’t map an incredibly large volume of the universe. But it will definitely give us some portraits of what the universe was like over 13 billion years ago, and especially what those young galaxies were like. And the structure and composition of those galaxies depends on the underlying dark matter. Everything from the amount of dark matter, what exactly it’s made of, and how it decides to group together all affect the formation of galaxies. These (currently unknown) properties of dark matter change how many galaxies there are, how bright they are, and even what kinds of stars they host.

However, this connection between galaxies and dark matter is really only understood in simulations. That’s because because we don’t have a lot of direct observations of dark matter (as if the name itself didn’t give you a clue). In short, we don’t fully understand what dark matter is. So sometimes we have to guess, and we put these guesses inside of a computer simulation of the growth of the universe, and we see how normal matter like stars and gas and dust react to that and form galaxies.

Let There Be Dust

So by comparing the actual images and statistics of galaxies revealed by the James Webb to our various simulations, we can hopefully find the best match and pick out which dark matter model is the most accurate. From there we can learn even more about the universe, like hunting for exotic models of gravity or even getting a clue as to the mysterious nature of dark energy (which is an entirely separate article).

This sounds straightforward but it isn’t. Observations in the universe are very messy and complicated and generally very hard, because there’s a lot more to our universe than just stars and galaxies and dark matter and the James Webb Space Telescope.

There’s also dust. A lot of it.

Dust is made of strings of carbon and oxygen and more, twirling and whirling inside of galaxies, around galaxies, and between galaxies. It turns out that intergalactic space is a pretty messy place. There’s just dust. And dust messes with light.

As the light from those distant galaxies passes through billions upon billions of light-years to reach the James Webb, it intersects a lot of dust. That dust will scatter it, weaken it, and also redshift it. In other words, if we’re trying to understand what these young galaxies look like, we can only see these galaxies through a hazy fog. So we don’t have – and will never get – direct clear images of the early universe.

Once more, simulations to the rescue.

But this time the simulations have some extra assistance. They have real live data to work with. Not data from the early universe (because we don’t have that yet) but data from the nearby universe. We’ve built maps and observations and studied to a ridiculous extent the properties of dust in between galaxies in our local patch of the cosmos. These data then get plugged into the simulations of the early universe to try to make as accurate predictions as possible of what the James Webb will actually see.

It’s like taking samples of the fog around you to try to understand what a distant lighthouse actually looks like.

Recently a team of researchers published results from a suite of simulations called Illustris. As the name suggests, these simulations are incredibly sophisticated, involving not just dark matter and the formation of galaxies, but even simulating the light emitted from these galaxies as it passes through billions of light-years of dust and into something like the James Webb.

But the luminosity function itself is also influenced by the dust, because the dust is changing all the light emitted from all the galaxies. These simulations are some of the first attempts to provide an end-to-end picture linking what the James Webb will see (in other words, what the data will actually be) to the underlying physics of dark matter and galaxy formation.

Of course this is just the first step; these simulations involve a lot of assumptions and best-guesses based on current observations. But I’m sure by the time the James Webb actually flies we’ll have a lot more data and a lot more simulations under our belt.