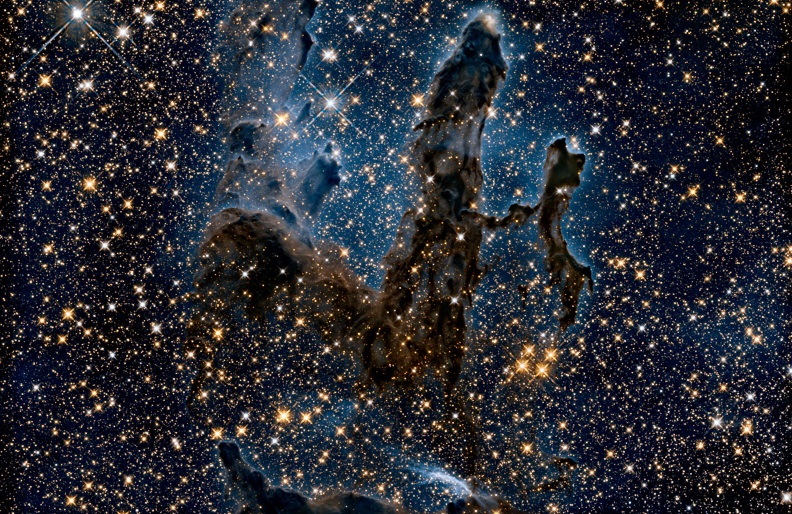 Next time you eat a blueberry (or chocolate chip) muffin consider what happened to the blueberries in the batter as it was baked. The blueberries started off all squished together, but as the muffin expanded they started to move away from each other. If you could sit on one blueberry you would see all the others moving away from you, but the same would be true for any blueberry you chose. In this sense galaxies are a lot like blueberries.

To make matters even more confusing, new observations suggest that the rate of this expansion in the universe may be different depending on how far away you look back in time. This new data, published in the Astrophysical Journal, indicates that it may time to revise our understanding of the cosmos.

Cosmologists characterise the universe’s expansion in a simple law known as Hubble’s Law (named after Edwin Hubble – although in fact many other people preempted Hubble’s discovery). Hubble’s Law is the observation that more distant galaxies are moving away at a faster rate. This means that galaxies that are close by are moving away relatively slowly by comparison.

The relationship between the speed and the distance of a galaxy is set by “Hubble’s Constant”, which is about 44 miles (70km) per second per Mega Parsec (a unit of length in astronomy). What this means is that a galaxy gains about 50,000 miles per hour for every million light years it is away from us. In the time it takes you to read this sentence a galaxy at one million light years’ distance moves away by about an extra 100 miles.

This expansion of the universe, with nearby galaxies moving away more slowly than distant galaxies, is what one expects for a uniformly expanding cosmos with dark energy (an invisible force that causes the universe’s expansion to accelerate ) and dark matter (an unknown and invisible form of matter that is five times more common than normal matter). This is what one would also observe of blueberries in an expanding muffin.

The history of the measurement of Hubble’s Constant has been fraught with difficulty and unexpected revelations. In 1929, Hubble himself thought the value must be about 342,000 miles per hour per million light years – about ten times larger than what we measure now. Precision measurements of Hubble’s Constant over the years is actually what led to the inadvertent discovery of dark energy. The quest to find out more about this mysterious type of energy, which makes up 70% of the energy of the universe, has inspired the launch of the world’s (currently) best space telescope, named after Hubble.

Now it seems that this difficulty may be continuing as a result of two highly precise measurements that don’t agree with each other. Just as cosmological measurements have became so precise that the value of the Hubble constant was expected to be known once and for all, it has been found instead that things don’t make sense. Instead of one we now have two showstopping results.

On the one side we have the new very precise measurements of the Cosmic Microwave Background – the afterglow of the Big Bang – from the Planck mission, that has measured the Hubble Constant to be about 46,200 miles per hour per million light years (or using cosmologists’ units 67.4 km/s/Mpc).

On the other side we have new measurements of pulsating stars in local galaxies, also extremely precise, that has measured the Hubble Constant to be 50,400 miles per hour per million light years (or using cosmologists units 73.4 km/s/Mpc). These are closer to us in time.

Both these measurements claim their result is correct and very precise. The measurements’ uncertainties are only about 300 miles per hour per million light years, so it really seems like there is a significant difference in movement. Cosmologists refer to this disagreement as “tension” between the two measurements – they are both statistically pulling results in different directions, and something has to snap.

So what’s going to snap? At the moment the jury is out. It could be that our cosmological model is wrong. What is being seen is that the universe is expanding faster nearby than we would expect based on more distant measurements. The Cosmic Microwave Background measurements don’t measure the local expansion directly, but rather infer this via a model – our cosmological model. This has been tremendously successful at predicting and describing many observational data in the universe.

So while this model could be wrong, nobody has come up with a simple convincing model that can explain this and, at the same time, explain everything else we observe. For example we could try and explain this with a new theory of gravity, but then other observations don’t fit. Or we could try and explain it with a new theory of dark matter or dark energy, but then further observations don’t fit – and so on. So if the tension is due to new physics, it must be complex and unknown.

A less exciting explanation could be that there are “unknown unknowns” in the data caused by systematic effects, and that a more careful analysis may one day reveal a subtle effect that has been overlooked. Or it could just be statistical fluke, that will go away when more data is gathered.

It is presently unclear what combination of new physics, systematic effects or new data will resolve this tension, but something has to give. The expanding muffin picture of the universe may not work anymore, and cosmologists are in a race to win a “great cosmic bake-off” to explain this result. If new physics is required to explain these new measurements, then the result will be a showstopping change of our picture of the cosmos.

This article was originally published by The Conversation.