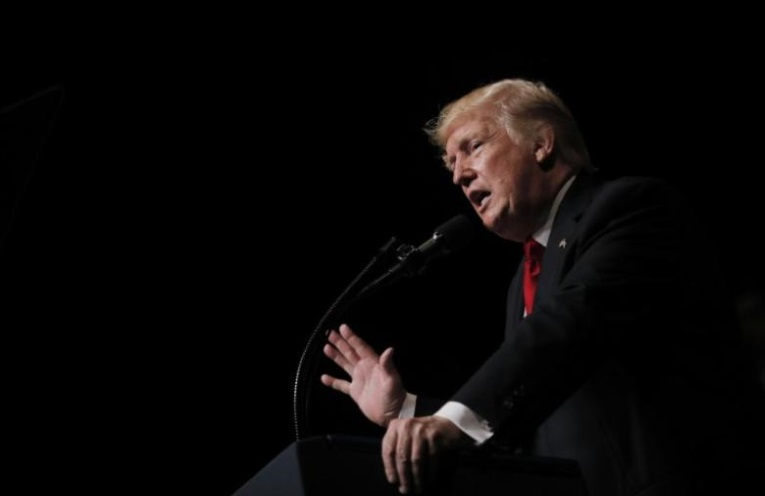 President Donald Trump had personal liabilities of at least $315.6 million to German, U.S. and other lenders as of mid-2017, according to a federal financial disclosure form released late on Friday by the U.S. Office of Government Ethics.

He had roughly $20 million in income from his new marquee Washington hotel, which opened just down the street from the White House last September. Revenues also increased at Mar-a-Lago, the Florida resort known as the “Winter White House.”

For example, Trump disclosed a liability to Deutsche exceeding $50 million for the Old Post Office, a historic Washington property where he has opened a hotel.

The largest component of Trump’s income was $115.9 million listed as golf-resort related revenues from Trump National Doral in Miami, down from $132 million he reported a year ago.

Income from many of his other hotels and resorts largely held steady. Revenue from Trump Corporation, his real-estate management company, nearly tripled, to $18 million, and revenue from Mar-a-Lago grew by 25 percent, to $37.25 million. The private club doubled its initiation fee to $200,000 after Trump’s election.

He earned $11 million from the Miss Universe pageant, after selling the beauty contest back in 2015.

Revenue from television shows like “The Apprentice” fell to $1.1 million, down from $6 million a year earlier.

His assets probably exceeded $1.4 billion because the disclosure form provided ranges of values.

The document showed Trump held officer positions in 565 corporations or other entities before becoming U.S. president. His tenure in most of those posts ended on Jan. 19, the day before his inauguration, and in others in 2015 and 2016.

Most of the entities involved were based in the United States, with a handful in Scotland, Ireland, Canada, Brazil, Bermuda and elsewhere.

Trump has refused to release his tax returns, which would give a much clearer indication of his wealth and business interests. But he has submitted federal forms disclosing his and his family’s income, assets and liabilities.

“President Trump welcomed the opportunity to voluntarily file his personal financial disclosure form,” the White House said in a statement, adding that the form was “certified by the Office of Government Ethics pursuant to its normal procedures.”

An Office of Government Ethics spokesman declined to comment on the contents of the report, other than to say that it was certified by the office, which is an ethics watchdog for federal government employees.

Trump released a disclosure form in May 2016 that his campaign at the time said showed his net worth was $10 billion. Some critics disputed that figure as overblown.

Before taking office in January, Trump was a New York real estate developer and television celebrity.