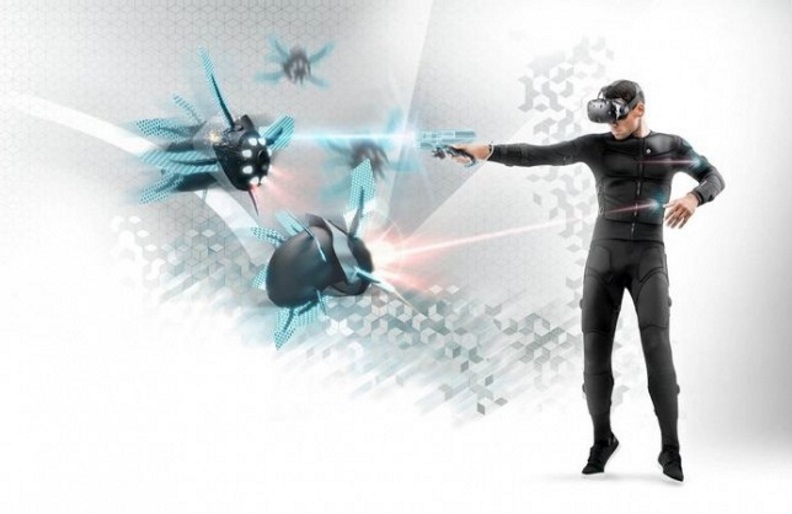 The potential applications of immersive virtual reality systems are increasing with the current market being beyond the traditional gaming sector. Virtual Reality (VR) can be used for information visualization in industrial sectors. The defense sector can use virtual reality to create simulated environments to train pilots, soldiers, and crisis response teams for situations that are too dangerous to use live equipment.

The costs associated with the technology is projected to decrease and more industries such as automotive, manufacturing, healthcare, education, rehabilitation, and many others are expected to incorporate virtual reality and haptic technology driving the VR market growth in an exponential way. Within this revolution, wearable clothing is going to play a paramount role.

Teslasuit motion capture system uses sensors to transfer the precise position of the body into virtual environments. The full-body haptic feedback and motion capture in a thermo-controlled suit takes the wearer even deeper into a virtual world.

The Teslasuit in a VR environment combines a number of features:

The virtual reality (VR) and augmented reality (AR) experience is only complete when all of the body’s senses are involved. By including transcutaneous electrical nerve stimulation (TENS or TNS/EMS) and high-precision motion tracking the Teslasuit has completely achieved the non-invasive immersion into xR.

Transcutaneous electrical nerve stimulation (TENS) is the use of electric current produced by a device to stimulate the nerves. This is primarly used for therapeutic purposes and it’s also used to improve and magnify the total immersion virtual reality experience. The results blur the line between virtual and real worlds.

“We wanted the Teslasuit to erase the difference between the virtual and the real worlds. The gaming market, entertainment, and enterprise in VR and AR are currently the natural applications for this technology,” said Dimitri Mikhalchuk, CEO of Teslasuit.

Electric Muscle Stimulation (EMS) is the process of causing muscle contractions using an external electrical charge or pulse, usually created by an EMS machine or device. It’s different from TENS as it makes the muscle contract.

The Teslasuit uses modular technology. The advanced haptic recreates the sensation of touch; it also simulates the feeling of the weight of objects in a virtual world.

The motion capture feature provides a two-way communication in a VR/AR environment, gesture control, and position tracking. The climate component transmits the temperature change in a digital environment; it simulates a range of temperature sensations as well.

Currently, Teslasuit is looking to collaborate more with developers to implement the haptic suit into more VR games. The Teslasuit platform currently supports Unreal and Unity3D Engines and it comes with full support for developers during the integration process.

The Teslasuit is expected to be available for purchase by 2019.

Ready Player One, the future of virtual reality, and the haptic suit

Set in 2043, the world suffers from an energy crisis from the depletion of fossil fuels, the consequences of global warming, and overpopulation. Ready Player One, originally a science-fiction dystopian novel written in 2011, was the debut novel of American author Ernest Cline.

To escape the real world, people turn to the Oasis, a virtual reality simulator accessible by players using visors and haptic technology. The Oasis functions as a virtual society, with its cryptocurrency being the most stable in the real world.

James Halliday, who had created the Oasis, had made a public announcement saying that he had left an Easter Egg inside Oasis. He had also created a challenge: the first person to find it would inherit his entire fortune, and the corporation that owned Oasis.

Five years after the announcement, Wade Watts discovers one of the three keys pointing to the treasure. He buys a haptic suit, pretty much like the Teslasuit, and from the there his experience in the Oasis escalated to a different level.

Years ago, this kind of science-fiction movie would have been just that: science fiction. However, the rapid advancements and developments in haptic technology make possible today to provide a fully immersive virtual reality experience to users of haptic technology wearables, pretty much like in Ready Player One.

What is haptic feedback?

Simply put, haptic feedback, or haptics, is a technology which allows the user of the haptic wearable to receive tactile information through their sensations.

“As this is smart clothing, it will work well for day-to-day life and well-being, for example in sports training and fitness,” says Dimitri Mikhalchuk, CEO of Teslasuit.

Multisensory smart clothing is able to analyze data of disparate data types relating them to each other. The more parameters are read, the more Artificial Intelligence (AI) is to up to speed on.

Compression under chest sensor provides electrocardiogram (ECG) technology to monitor heart rate activity. This enables the acceleration or slowing down of the gameplay providing a more exciting scenario to the player, or giving an opportunity to recover.

Thermocouples monitor the temperature throughout the gaming process and will send out signals when the climate control system should be turned on.

The reality of the experience is enhanced by a climate control system which provides the gamer with more realistic immersive sensations. These sensations can be associated with temperature and the thermosetting selected by the user and the content provider.

The future of VR: Not just for gaming

Using haptic training in combination with video and audio has proved its effectiveness as a valuable tool in professional skill training and development within many industries.

“We see its potential future use in a variety of different sectors including manufacturing, automotive, healthcare, and medical fields; in particular for use in rehabilitation, biometric data set building, collection and data management,” says Dimitri Mikhalchuk.

A Virtual Reality environment for professional training with haptic feedback can be implemented in many businesses where the motor skill learning of workers is extremely important and is held on a regular basis.

The advantage of haptic training is in the acceleration of the learning process. It also enables skills confidence and experience. Haptic applications in training can address the usual shortage of coaches and training space.