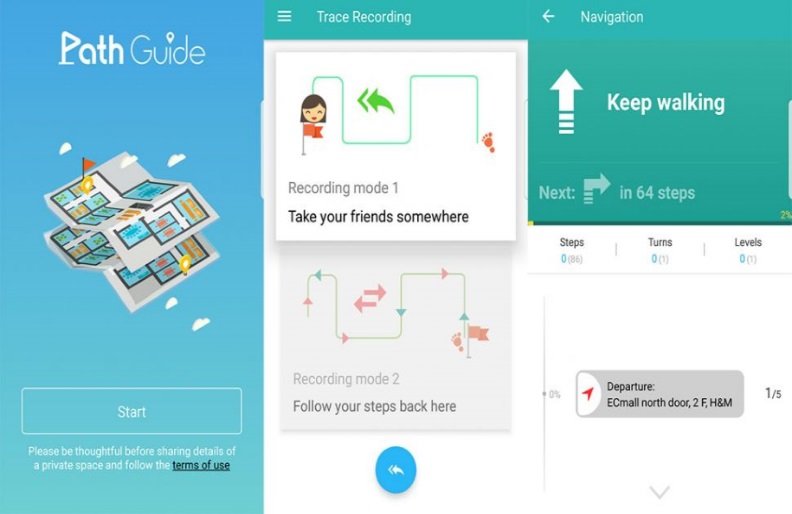 Microsoft has developed a new app called PathGuide which it’s hoping will solve the problem of indoor navigation.

GPS location software has all but solved the issue of getting lost outside if you have a smartphone, but once you get inside the building you’re heading to you’re often then left scrambling for any sense of where you’re supposed to be heading.

The reason for this is that GPS technology relies on satellite signals, the strength of which is disrupted by the thick walls of buildings, meaning that as soon as you step inside you’re left relatively blind.

There are already systems that have attempted to solve the problem of indoor location using Bluetooth beacons, like Apple’s iBeacon, or Wi-Fi signals, but both require an expensive and expansive setup, and it’s unrealistic that every building you visit will want to invest in this technological infrastructure.

To solve the problem, Microsoft has come at the problem from the other direction – user first. Its system works by getting users to guide each other. In the app, you have the option to create a ‘Trace’; you walk the path that you want others to follow, annotating your route with text, images and voice.

PathGuide tracks the distance walked and directions turned using on-board sensors, then creates a route for others to follow. You can then send the route to friends, or leave it publicly searchable.

If you’re meeting up with friends and one of you is running late, this could prove to be an invaluable service, allowing you to show them exactly where they’re supposed to be going.

As with any crowdsourcing platform, it does mean the onus is on the user to create the content, but as with Wikipedia, we have seen that crowdsourced projects can work.

One of the cool features Microsoft highlights on the app is the ability to create a ‘trace’ that allows you to retrace your steps in the opposite direction, meaning that once you’ve parked your car you can create a trace to the lift, and on returning to the lift you just start up the trace and it leads you straight to your car.

The app is currently in the development stage so it’s only available on Android, and still has a few niggly issues like not being able to run in the background, so you can’t close the app to text someone to let them know you’re on your way and still get notifications, as you can with Google Maps.

If you want to download the app it’s available on the Play Store, or you can visit the PathGuide official page to learn more.