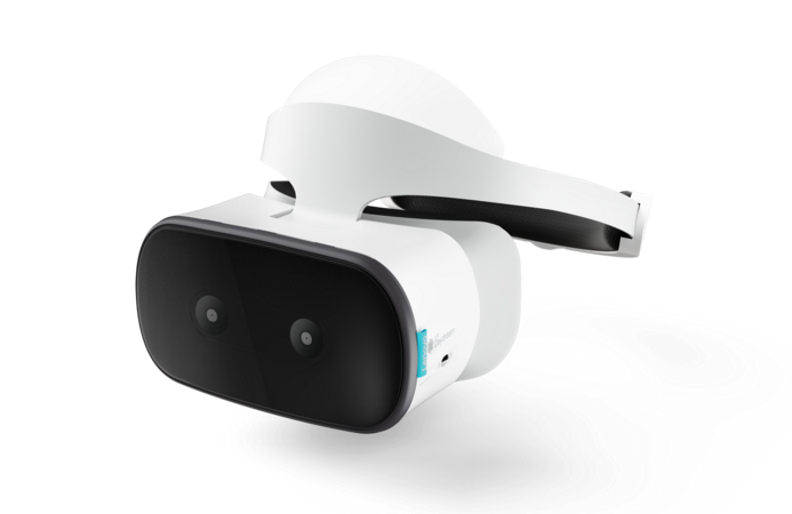 For all of its promise and potential, virtual reality still has its fair share of headaches. Early headsets like the HTC Vive and Oculus Rift, even at their new lower price points, still cost a considerable amount of money. They’re also time consuming to set up, and must be attached to a powerful (and pricey) computer in order to work.

Tech companies have been hard at work fixing at least some of these problems. Take, for example, Lenovo’s new Mirage Solo VR headset, which operates entirely on its own without a computer or smartphone. Instead, all of the necessary technology is built into the headset itself, making it far more independent than rival devices. Users can expect to get about seven hours of battery life out of the Mirage Solo on a single charge, Lenovo says. Lenovo hasn’t specified a price point yet, but says the Mirage Solo will cost less than $400, same as the Oculus Rift.

Lenovo’s headset will run on Google Daydream software, which means it will have access to the same VR apps and games as Daydream-compatible Android phones. The headset also incorporates Google’s WorldSense technology, which tracks movement without the need for extra external sensors.

This is what sets the Mirage Solo apart from Facebook’s upcoming Oculus Go headset, which also doesn’t require a computer or smartphone to work and is expected to launch this year. Lenovo’s new VR visor uses inside-out tracking to provide six degrees of freedom, meaning wearers can move around somewhat freely in their virtual environment and can interact with digital elements therein. The Oculus Go and smartphone-based VR systems like the Gear VR don’t allow for this level of freedom because they don’t track your body’s movement in physical space.

The Mirage Solo provides a middle ground between headsets like the Oculus Go and premium VR gear such as the Oculus Rift and HTC Vive. The Mirage Solo isn’t capable of room-scale virtual reality like the experience offered by the Rift and the Vive, but wearers can still can duck and dodge when playing games and can walk around a little bit. That’s more than what headsets like the Gear VR allow for.

I experienced this firsthand when playing a Blade Runner-themed game with the Mirage Solo. The game placed me in the center of a dreary Chinatown alleyway, where I was able to walk around and point my remote at certain objects and people to learn more about them. As I sauntered toward the police hovercar to my left, I noticed the world in front of me slowly started to fade into a gray blur until I finally lost sight of my surroundings. That’s a safety mechanism built into the Mirage Solo meant to warn wearers to stop moving in order to avoid bumping into nearby real-world objects. Lenovo’s headset can’t detect objects and furniture since it doesn’t scan the user’s surroundings, but it prompts users with the blurring mechanism when they stray too far from where they were standing when they started playing the game.

The headset itself is comfortable to wear and easy to adjust. It’s lightweight enough to enjoyably wear while standing or sitting, while a wheel along the back of the visor’s band makes it possible to loosen or tighten the headgear. That wheel is easy enough to locate by feel, which means wearers won’t find themselves needing to take off the headset in the middle of a game or movie to adjust its fit.

Using the Mirage Solo feels just like virtual reality should: Turn on the headset, snap it on, and you’re ready to jump right into an app or game. That alone makes Lenovo’s standalone headset feel like a big leap forward compared to most existing VR gadgets. But at the same time, I’m not sure that it will be enough to convince people who aren’t already interested in VR to jump onboard. Costing around $400, the Mirage Solo is a considerable investment for most people, especially considering the Oculus Go will only cost $200.

Of course, there are significant benefits to be had besides the convenience of being able to roam around cord-free. Because the Mirage is an independent computer, buyers don’t have to worry about whether or not their existing gear is compatible before buying the headset. Likewise, they won’t have to worry about draining their smartphone’s battery every time they want to experience VR. But smartphone VR is still significantly cheaper, with the Gear VR priced at $129 and the Daydream View costing $99. Lenovo, however, is betting that customers will be willing to pay a hefty premium for the advantages offered by the Mirage — and it just might be worth it for some people.

This article was originally published by Time