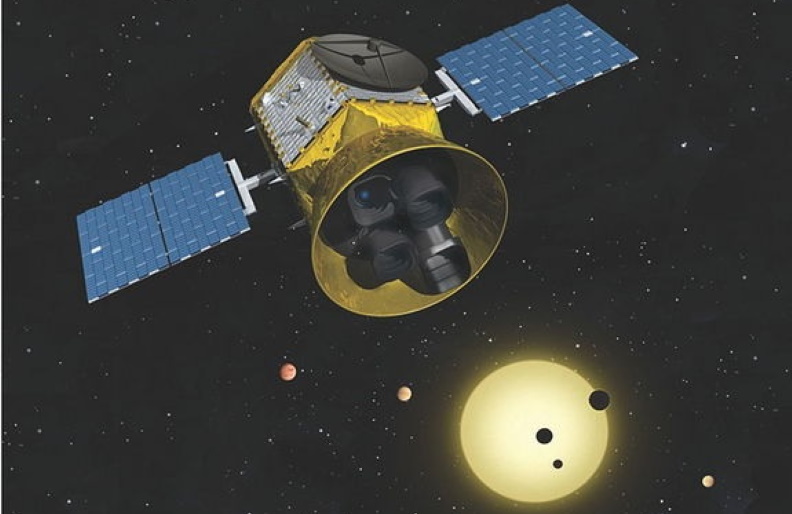 Using data from NASA’s Transiting Exoplanet Survey Satellite (TESS), astronomers at the University of Maryland (UMD), in College Park, Maryland, have captured a clear start-to-finish image sequence of an explosive emission of dust, ice and gases during the close approach of comet 46P/Wirtanen in late 2018. This is the most complete and detailed observation to date of the formation and dissipation of a naturally-occurring comet outburst. The team members reported their results in the November 22 issue of The Astrophysical Journal Letters.

“TESS spends nearly a month at a time imaging one portion of the sky. With no day or night breaks and no atmospheric interference, we have a very uniform, long-duration set of observations,” said Tony Farnham, a research scientist in the UMD Department of Astronomy and the lead author of the research paper. “As comets orbit the Sun, they can pass through TESS’ field of view. Wirtanen was a high priority for us because of its close approach in late 2018, so we decided to use its appearance in the TESS images as a test case to see what we could get out of it. We did so and were very surprised!”

“While TESS is a powerhouse for discovering planets orbiting nearby, bright stars, its observing strategy enables so much exciting additional science,” said TESS project scientist Padi Boyd of NASA’s Goddard Space Flight Center in Greenbelt, Maryland. “Since the TESS data are rapidly made public through NASA’s Mikulski Archive for Space Telescopes (MAST), it’s exciting to see scientists identifying which data are of interest to them, and then doing all kinds of additional serendipitous science beyond exoplanets.”

Normal comet activity is driven by sunlight vaporizing the ices near the surface of the nucleus, and the outflowing gases drag dust off the nucleus to form the coma. However, many comets are known to experience occasional spontaneous outbursts that can significantly, but temporarily increase the comet’s activity. It is not currently known what causes outbursts, but they are related to the conditions on the comet’s surface. A number of potential trigger mechanisms have been proposed, including a thermal event, in which a heatwave penetrates into a pocket of highly volatile ices, causing the ice to rapidly vaporize and produce an explosion of activity, and a mechanical event, where a cliff collapses, exposing fresh ice to direct sunlight. Thus, studies of the outburst behavior, especially in the early brightening stages that are difficult to capture, can help us understand the physical and thermal properties of the comet.

Although Wirtanen came closest to Earth on December 16, 2018, the outburst occurred earlier in its approach, beginning on September 26, 2018. The initial brightening of the outburst occurred in two distinct phases, with an hour-long flash followed by a more gradual second stage that continued to grow brighter for another 8 hours. This second stage was likely caused by the gradual spreading of comet dust from the outburst, which causes the dust cloud to reflect more sunlight overall. After reaching peak brightness, the comet faded gradually over a period of more than two weeks. Because TESS takes detailed, composite images every 30 minutes, the team was able to view each phase in exquisite detail.

“With 20 days’ worth of very frequent images, we were able to assess changes in brightness very easily. That’s what TESS was designed for, to perform its primary job as an exoplanet surveyor,” Farnham said. “We can’t predict when comet outbursts will happen. But even if we somehow had the opportunity to schedule these observations, we couldn’t have done any better in terms of timing. The outburst happened mere days after the observations started.”

The team has generated a rough estimate of how much material may have been ejected in the outburst, about one million kilograms (2.2 million pounds), which could have left a crater on the comet of around 20 meters (about 65 feet) across. Further analysis of the estimated particle sizes in the dust tail may help improve this estimate. Observing more comets will also help to determine whether multi-stage brightening is rare or commonplace in comet outbursts.

TESS has also detected for the first time Wirtanen’s dust trail. Unlike a comet’s tail—the spray of gas and fine dust that follows behind a comet, growing as it approaches the sun—a comet’s trail is a field of larger debris that traces the comet’s orbital path as it travels around the sun. Unlike a tail, which changes direction as it is blown by the solar wind, the orientation of the trail stays more or less constant over time.

“The trail more closely follows the orbit of the comet, while the tail is offset from it, as it gets pushed around by the sun’s radiation pressure. What’s significant about the trail is that it contains the largest material,” said Michael Kelley, an associate research scientist in the UMD Department of Astronomy and a co-author of the research paper. “Tail dust is very fine, a lot like smoke. But trail dust is much larger—more like sand and pebbles. We think comets lose most of their mass through their dust trails. When the Earth runs into a comet‘s dust trail, we get meteor showers.”

While the current study describes initial results, Farnham, Kelley and their colleagues look forward to furthering analyses of Wirtanen, as well as other comets in TESS’ field of view. “We also don’t know what causes natural outbursts and that’s ultimately what we want to find,” Farnham said. “There are at least four other comets in the same area of the sky where TESS made these observations, with a total of about 50 comets expected in the first two years’ worth of TESS data. There’s a lot that can come from these data.”