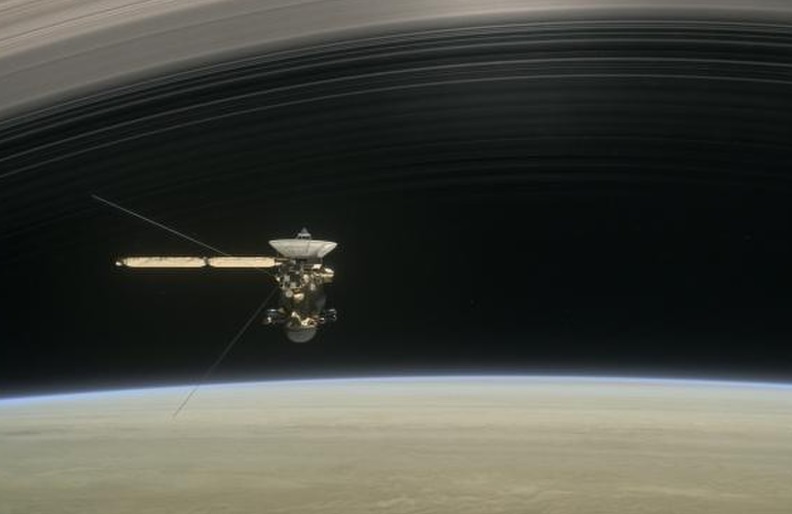 To distant, Earthling eyes, the gap between Saturn and its rings looks calm, like a deep breath of empty space between one beautifully intricate structure and another. But in 11 new papers, born from the demise of one of NASA’s most beloved planetary science missions, scientists destroy that illusion, laying out a set of unexpectedly complicated phenomena dancing through that emptiness.

Those papers, published today in two key science journals, represent the first research to be published with data from the Cassini mission’s so-called “Grand Finale,” a daring set of orbits during which the spacecraft threaded itself between Saturn and its rings. Taken together, the papers paint a detailed picture of what’s happening between the planet’s innermost rings and its upper atmosphere — surprising, eye-catching phenomena like a pounding hail of compounds pummeling the planet’s equatorial region and an electric current produced merely by the planet’s winds and magnetic field.

“We really did think of it as a gap,” Linda Spilker, project scientist for the Cassini mission at NASA, told Space.com of the region between Saturn and its rings. The team was optimistic about what Cassini could learn during its demise, but the operation ended up producing what she called “a much richer science return than we had imagined” — she went so far as to compare it to a brand-new mission. [Cassini continues on its final Saturn jaunt]

The Cassini spacecraft spent a total of 13 years studying Saturn and its moons. But when it was due to run out of fuel, the scientists behind the mission designed a daring trajectory that would send the spacecraft looping through Saturn’s rings before burning up in its atmosphere. That destruction ensured that potentially habitable moons in the system wouldn’t catch any Earth germs that might have hitched a ride aboard the spacecraft.

But it also let scientists squeeze a little extra data out of its instruments — and pushed the spacecraft further than they thought might be possible, since neither Cassini nor its instruments was designed to accomplish such an incredible feat. Scientists gathered for the first dive, wondering whether the spacecraft would survive long enough to even begin the Grand Finale.

Spilker and other Saturn scientists say the spacecraft’s revelations sifted from the data are far from complete, even after the papers published today (Oct. 4). “You look at basically the firehose of data that’s come back from Cassini in the past 13 years, really, we’ve only skimmed the cream across the top of the data set,” Spilker said. That work has helped scientists begin to understand individual phenomena taking place at Saturn. “The next step that’s happening even now is to take those pieces and put them together into a coherent picture to look across all of the data sets and ask is there one common story,” Spilker said.

But in the meantime, here’s a peek at what scientists have already learned about the ringed planet.

One new discovery was prompted by instrument results so strange that scientists on the team and beyond it at first thought there had to be a mistake. That instrument, called the Ion and Neutral Mass Spectrometer, or INMS, can sniff out the chemical composition of material it catches.

Scientists are particularly excited to see these results because word had gotten out that the instrument was onto something. “Since the end of the mission, there’s been a lot of talk about these INMS results,” Bonnie Meinke, a Saturn scientist at the Space Telescope Science Institute, who was not involved in any of the new research, told Space.com. “At first glance, it’s the kind of thing that you almost don’t believe, and as a scientist, you have to do a little gut check,” Meinke said.

The instrument had a good track record, having gathered critical data earlier in the mission while Cassini explored moons like Titan and Enceladus. “Then we really got to focus in on Saturn and let it be the star for that final part of the mission,” Rebecca Perryman, the operations lead for INMS at the Southwest Research Institute, told Space.com. “We’d done a lot of work to get everything planned initially and had really boasted that INMS would be able to get some fantastic results once we started dipping down into the atmosphere.”

They had expected those results to be measurements of the masses of “ring rain,” which scientists knew as a trickle of tiny particles falling from Saturn’s innermost ring down toward the planet’s upper atmosphere — some hydrogen and helium mostly — nothing fancy.

But what they seem to have found was far more material than they had expected, coming from far more exotic compounds. The instrument spotted not just hydrogen and helium but also carbon monoxide, methane, nitrogen and the unidentifiable remains of organic molecules.

Other instruments suggested that this downpour also included water ice and silicate particles and showed that the downpour is triggered by the interaction of these particles with the highest levels of Saturn’s atmosphere. Around the whole ring structure, it all adds up to somewhere around 10 tons (9,000 kilograms) per second.

“The complexity of what was going on there and the amount of material that was infalling was very surprising,” Hunter Waite, the principal investigator on INMS and a scientist at the Southwest Research Institute, told Space.com. And the discovery doesn’t just reveal an intriguing phenomenon about a distant world — scientists say that if the finding holds up, it might have much deeper implications in our own solar system and beyond.

Waite said that the unexpected diversity of compounds in the ring rain might affect scientists’ estimates for the composition of the atmosphere, which could in turn mean adapting hypotheses about how Saturn and its neighbors formed and evolved. “It might just have this facade,” Waite said of Saturn. “[That might have] been a little bit deceptive in steering our thinking about formation and evolution.”

Moreover, because there’s so very much of the material, the new results pose a puzzle: Where does it all come from? “This can’t be a continuous process, or the rings wouldn’t be there,” Meinke said. They would run out of material in perhaps tens of thousands of years, leaving Saturn bare. “The real story that [the paper is] telling is about the churn of Saturn’s rings … rings can be long-lived because they’re constantly moving and turning over.”

Cassini was also equipped to measure Saturn’s magnetic field. Although scientists had studied the magnetic field before, they were only able to do so briefly during flybys like those done by Pioneer and Voyager, and Cassini’s Grand Finale brought them deeper into that field than ever before.

And the measurements gathered during those tight loops have offered their own surprises. Scientists already knew that Saturn’s magnetic field seemed to line up awfully well with the axis it spins on — which is a tricky feat, since as far as anyone can figure out, magnetic fields are by definition created by crossing spins.

But a new analysis of Grand Finale measurements shows that those two phenomena line up even more perfectly than scientists had expected. That means scientists have to go back to the drawing board, trying to coax an answer out of magnetic-field and gravitational data. “We know there’s something weird,” Michele Dougherty, a physicist at Imperial College London and lead author on the paper, told Space.com.

She and her colleagues think that there may be something blocking scientists’ views of the real magnetic heart of Saturn, creating the illusion of near-perfect alignment and stymying their theories. “We haven’t got the answer yet, but whatever answer we come up with is really going to change people’s understanding of the interior structure of planets,” Dougherty said.

Until they sort out what’s going on, scientists won’t be able to precisely measure how long it takes Saturn to spin. “It’s a bit embarrassing, we were in orbit there for 13 years and we still can’t say how long a day on Saturn is,” Dougherty said. With neither fixed features on a solid surface nor a magnetic field to track, they’re stuck with just an estimate of 10.7 hours.

The hunt for the heart of the magnetic field was muddled in part by another surprise lurking in the magnetic data: a new phenomenon produced by that magnetic field interacting with bands of winds flowing at different rates in Saturn’s upper atmosphere — an electric current rippling through a layer of atmosphere called the thermosphere.

Here’s how it works: Saturn is wrapped in bands of winds, with the one at the equator traveling fastest and those to the north and south moving more slowly. When a loop-like structure of magnetic field aligns so that one end is in that equatorial band and the other is not, the equatorial wind tugs at the charged particles of plasma around it, which in turn skews the magnetic-field line.

The result that Cassini measured is an electric current as strong as 200 large terrestrial power plants combined. As a side effect, that current also produces heat in the atmosphere around it, which may help explain a long-standing mystery about Saturn. “One of the enigmas of Saturn’s thermosphere is, it’s hotter than expected,” Krishan Khurana, a magnetosphere scientist at the University of California, Los Angeles, and lead author on the paper, told Space.com. “This provides a part of the answer.”

And while Saturn is the star here, the results may explain a second solar system mystery as well. “Jupiter’s atmosphere is highly turbulent and so the same phenomenon applied to the magnetic field of Jupiter would create pretty large currents and would heat the thermosphere pretty rapidly,” Khurana said. That includes the Great Red Spot, the giant storm that infamously gnarls Jupiter’s southern hemisphere, and that scientists have realized is awfully toasty.

The Grand Finale isn’t the end

That’s just a sampling of the research published today — which is in turn only the beginning of the flood of science that Cassini’s Grand Finale will eventually produce. One paper focused on the region of Saturn’s atmosphere that produces auroral radio emissions to try to understand how those radio waves are produced.

In another paper, a team of researchers identified a long-predicted but previously unknown radiation belt reaching from the planet’s upper atmosphere across its innermost ring. That means it’s completely distinct from Saturn’s main magnetosphere, trapping charged particles in this stretch of space between upper atmosphere and inner ring. A further study of this new radiation belt shows that because of the interference of the bulky rings, this radiation belt is fairly weak compared to other such structures.

A different instrument on board Cassini measured the density of electrons in Saturn’s ionosphere, mapping out two separate layers. The lower layer sports larger neutral and charged molecules around the equator, below the rings and their flood of material; the upper layer features a much more scanty array of tiny, charged particles.

And that same INMS instrument that helped identify so many strange compounds in the so-called ring rain also allowed scientists to calculate the approximate temperatures of the thermosphere layer of atmosphere that Cassini was flying through. Those measurements ranged from 150 to 200 degrees Fahrenheit (67 to 97 degrees Celsius).

Two more papers that weren’t quite ready to be published highlight topics like the tiny moonlets embedded in Saturn’s rings and gravity measurements taken of the giant planet. And then, of course, there are far more discoveries to be made as scientists continue to dig into and analyze the Grand Finale data and the rest of Cassini’s work — not to mention the observations of whatever successor spacecraft the mission’s discoveries inspire.

“I think it’s a really exciting time,” Meinke, the Saturn scientist who is unaffiliated with any of the new research, said. “After 13 years of Cassini data, that last little bit was really the most exciting, the stuff that left us wanting to go back and really taught us even more than we thought we were going to learn.”