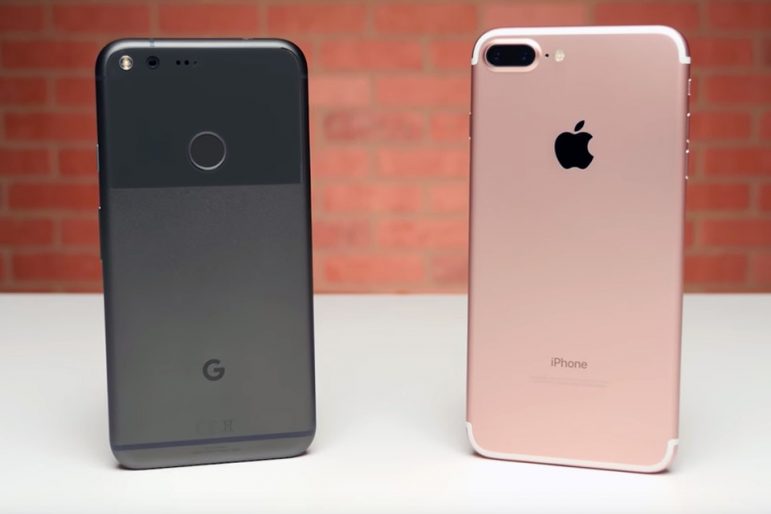 The discontinuation of the Galaxy Note 7 means that Samsung is effectively out of the running this holiday season, since its most recent flagship smartphone is now about seven months old. That means if shoppers in the United States want a fresh new top-of-the-line smartphone this holiday season, they basically have four phones to choose from. In the Android camp, Google’s new Pixel and Pixel XL are the cream of the crop, offering the latest and greatest version of Android powered by cutting-edge components that are stuffed into a sleek, though familiar housing. On the other side of the fence we have Apple’s new iPhone 7 and iPhone 7 Plus, which also pack powerful new components fitted into an all-too familiar case.

Any one of these four flagship phones is a fantastic option, but there’s nothing like a good old-fashioned showdown to see which premium smartphone is this year’s speed champ.

We shared a real-world speed test of sorts with you last week that showed a face-off between the Pixel and the iPhone 7 Plus, but it wasn’t the comprehensive performance comparison we were waiting for. Now, YouTube user PhoneBuff has finally finished his testing and released a video that shows off the showdown we’ve been waiting for.

In this test, the narrator looks to illustrate how each phone performs in the real world, where the bulk of our usage involves opening, closing and switching apps. It’s not perfect or scientific, but it’s a much better way than specs on paper to compare how these phone perform everyday tasks.

PhoneBuff chose to pit the iPhone 7 Plus against Google’s Pixel XL phablet, which some people will think is a good comparison and others will complain about. Both groups will make valid points: on one hand, the Pixel XL features a quad HD screen while the iPhone 7 Plus is only 1080p, which means Google’s phone has far more pixels to power. On the other hand, this test compares real-world performance. These are the two best phablets in the world right now, and users want to know how they compare.

So, how did these two supersized smartphones perform? Was Google’s Pixel XL finally able to dethrone the reigning speed test king? We won’t spoil the ending but we will say this: It’s not even close.

The full speed test video is embedded below, and the action starts at 1:35.