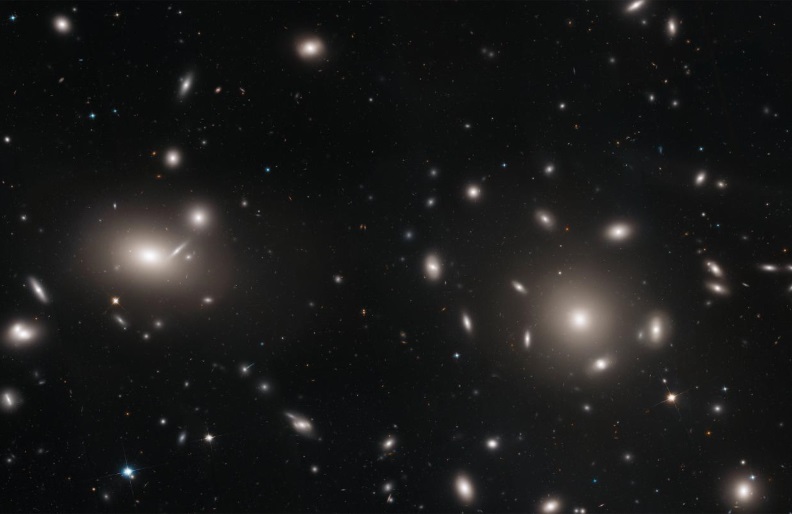 Gazing across 300 million light-years into a monstrous city of galaxies, astronomers have used NASA’s Hubble Space Telescope to do a comprehensive census of some of its most diminutive members: a whopping 22,426 globular star clusters found to date.

The survey, published in the November 9, 2018, issue of the Astrophysical Journal, will allow for astronomers to use the globular cluster field to map the distribution of matter and dark matter in the Coma galaxy cluster, which holds over 1,000 galaxies that are packed together.

Because globular clusters are much smaller than entire galaxies – and much more abundant – they are a much better tracer of how the fabric of space is distorted by the Coma cluster’s gravity. In fact, the Coma cluster is one of the first places where observed gravitational anomalies were considered to be indicative of a lot of unseen mass in the universe – later to be called “dark matter.”

Among the earliest homesteaders of the universe, globular star clusters are snow-globe-shaped islands of several hundred thousand ancient stars. They are integral to the birth and growth of a galaxy. About 150 globular clusters zip around our Milky Way galaxy, and, because they contain the oldest known stars in the universe, were present in the early formative years of our galaxy.

Some of the Milky Way’s globular clusters are visible to the naked eye as fuzzy-looking “stars.” But at the distance of the Coma cluster, its globulars appear as dots of light even to Hubble’s super-sharp vision. The survey found the globular clusters scattered in the space between the galaxies. They have been orphaned from their home galaxy due to galaxy near-collisions inside the traffic-jammed cluster. Hubble revealed that some globular clusters line up along bridge-like patterns. This is telltale evidence for interactions between galaxies where they gravitationally tug on each other like pulling taffy.

Astronomer Juan Madrid of the Australian Telescope National Facility in Sydney, Australia first thought about the distribution of globular clusters in Coma when he was examining Hubble images that show the globular clusters extending all the way to the edge of any given photograph of galaxies in the Coma cluster.

He was looking forward to more data from one of the legacy surveys of Hubble that was designed to obtain data of the entire Coma cluster, called the Coma Cluster Treasury Survey. However, halfway through the program, in 2006, Hubble’s powerful Advanced Camera for Surveys (ACS) had an electronics failure. (The ACS was later repaired by astronauts during a 2009 Hubble servicing mission.)

To fill in the survey gaps, Madrid and his team painstakingly pulled numerous Hubble images of the galaxy cluster taken from different Hubble observing programs. These are stored in the Space Telescope Science Institute’s Mikulski Archive for Space Telescopes in Baltimore, Maryland. He assembled a mosaic of the central region of the cluster, working with students from the National Science Foundation’s Research Experience for Undergraduates program. “This program gives an opportunity to students enrolled in universities with little or no astronomy to gain experience in the field,” Madrid said.

The team developed algorithms to sift through the Coma mosaic images that contain at least 100,000 potential sources. The program used globular clusters’ color (dominated by the glow of aging red stars) and spherical shape to eliminate extraneous objects – mostly background galaxies unassociated with the Coma cluster.

Though Hubble has superb detectors with unmatched sensitivity and resolution, their main drawback is that they have tiny fields of view. “One of the cool aspects of our research is that it showcases the amazing science that will be possible with NASA’s planned Wide Field Infrared Survey Telescope (WFIRST) that will have a much larger field of view than Hubble,” said Madrid. “We will be able to image entire galaxy clusters at once.”