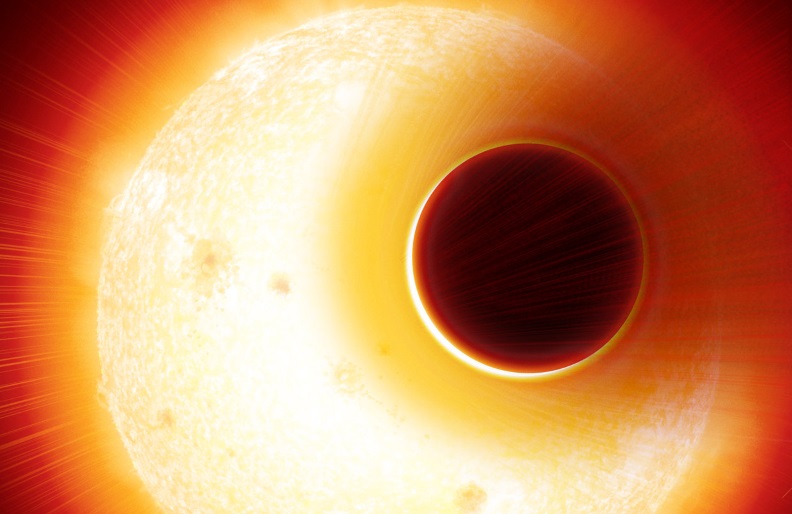 Astronomers have discovered a distant planet with an abundance of helium in its atmosphere, which has swollen to resemble an inflated balloon.

An international team of researchers, including Jessica Spake and Dr David Sing from the University of Exeter, have detected the inert gas escaping from the atmosphere of the exoplanet HAT-P-11b – found 124 light years from Earth and in the Cygnus constellation.

The remarkable breakthrough was led by researchers from the University of Geneva, who observed the exoplanet using the spectrograph called Carmenes, installed on the 4-metre telescope at Calar Alto, Spain.

For the first time, the data revealed the speed of helium atoms in the upper atmosphere of the exoplanet, which is equivalent in size to Neptune. The helium is in an extended cloud that is escaping from the planet, just as a helium balloon might escape from a person’s hand.

The research team believe that the ground-breaking study could open up new understandings of the extreme atmospheric conditions found around the hottest exoplanets.

The research is published in the leading journal, Science, on December 6 2018.

Jessica Spake, part of Exeter’s Physics and Astronomy department said: “This is a really exciting discovery, particularly as helium was only detected in exoplanet atmospheres for the first time earlier this year. The observations show helium being blasted away from the planet by radiation from its host star. Hopefully we can use this new study to learn what types of planets have large envelopes of hydrogen and helium, and how long they can hold the gases in their atmospheres.”

Helium was first detected as an unknown yellow spectral line signature in sunlight in 1868. Devon-based astronomer Norman Lockyer was the first to propose this line was due to a new element, and named it after the Greek Titan of the Sun, Helios. It has since been discovered to be one of the main constituents of the planets Jupiter and Saturn in our Solar System.

It is also the second most common element in the universe and was long- predicted to be one of the most readily-detectable gases on giant exoplanets. However, it was only successfully found in an exoplanet atmosphere earlier this year, in a pioneering study also led by Jessica Spake.

For this new study, the research team used the spectrograph, Carmenes, to pull apart the star’s light into its component colours, like a rainbow, to reveal the presence of helium. The ‘rainbow’ data, called a spectrum, also tells us the position and speed of helium atoms in the upper atmosphere of HAT-P-11b, which is 20 times closer to its star than the Earth is from the Sun.

Romain Allart, PhD student at the University of Geneva and first author of the study said: “We suspected that this proximity with the star could impact the atmosphere of this exoplanet. The new observations are so precise that the exoplanet atmosphere is undoubtly inflated by the stellar radiation and escapes to space.”

These new observations are supported by a state-of-the-art computer simulation, led by Vincent Bourrier, co-author of the study and member of the European project FOUR ACES, used to track the trajectory of helium atoms.

Vincent Bourrier explained: “Helium is blown away from the day side of the planet to its night side at over 10,000 km an hour. Because it is such a light gas, it escapes easily from the attraction of the planet and forms an extended cloud all around it.”

It is this phenomenon that makes HAT-P-11b so inflated, like a helium balloon.

The first detection of helium earlier this year, led by University of Exeter researchers, opened a new window to observe the extreme atmospheric conditions reigning in the hottest exoplanets. These new observations from Carmenes demonstrate that such studies, long thought feasible only from space, can be achieved with greater precision from ground-based telescopes equipped with the right kind of instruments.