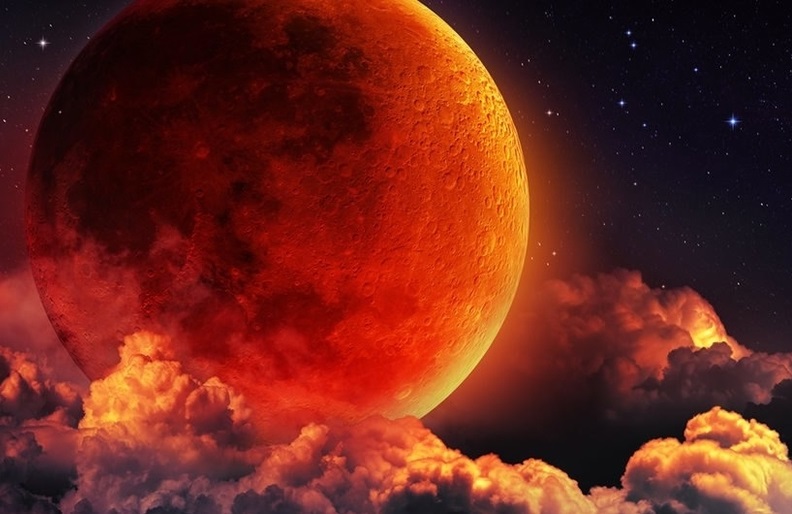 On July 27th, 2018 most of the world will be treated to an extraordinary evening of activity in the sky. First, there will be a total lunar eclipse and although uncommon, this one is special because it’s going to last a lot longer than usual – in fact the longest this century.

But that’s not all. Mars will shine brighter than it has in 15 years.

There’s an eclipse of the moon tonight? Why is it such a big deal?

Yes, it’s a total lunar eclipse, so the moon will be entirely in the Earth’s shadow.

Although total lunar eclipses happen relatively often, the one happening on Friday 27 July 2018 is particularly special because it will last for the longest time of any such eclipse in the 21st century.

Totality (the part of the eclipse when the moon is entirely in the Earth’s shadow) will last for a full 1 hour and 43 minutes. This is much longer than standard lunar eclipses which last for only around one hour.

The next time a similarly extended eclipse will happen again is in 2025. That’s due to last for 1 hour and 22 minutes.

Who is going to be able to see it around the world?

Near to the reddish lunar eclipse, Mars will also be looking fairly spectacular. It will be at opposition, which means that it’s at the opposite side of the Sun to the Earth.

This means it will be very bright – even brighter than Jupiter. It will also be nearly three times brighter than Sirius – the brightest star in the night sky. The Sun, the moon and Venus will be the only (natural) objects in the sky brighter than Mars.

It’s also what’s being called a ‘blood moon’. What’s that about?

As a scientist I don’t like the use of the description ‘blood moon’. Its associations are more superstitious than scientific. But let me explain what happens.

A reddish tint is, to some degree, common in all lunar eclipses, even partial ones. This eclipse is a total lunar eclipse, which means it will be particularly red.

During an eclipse, most of the light from the Sun is blocked by the Earth as the moon travels through the Earth’s shadow. But a small amount of light does actually pass through the outer parts of the Earth’s atmosphere and reflect off the moon.

Only red light makes it through the atmosphere. This is why the moon will appear red during the eclipse, and is therefore sometimes nicknamed a ‘blood moon’.

Can astronomers learn anything from these events?

By observing the Moon with infrared cameras, such as the one on NASA’s Lunar Reconnaissance Orbiter, scientists get a chance to see what happens when the surface of the Moon cools quickly.

This can help them understand some of the characteristics of the regolith – the mixture of soil and loose rocks on the surface – and how it changes over time.

What will people see?

The moon will begin to move into the penumbra – the fuzzy outer edge of the Earth’s shadow – at 17:14 GMT. A dark wedge will begin to appear on the surface of the moon.

The moon will begin to appear reddish around 18:24 GMT as it moves into the main part of the Earth’s shadow. Totality will begin at 19:30 GMT and last until 21:13 GMT.

This is when the moon is completely inside the Earth’s shadow and is the most spectacular part of the lunar eclipse. It will appear as a dark, reddish disk in the sky.

This article was originally published by The Conversation. Read the original article.