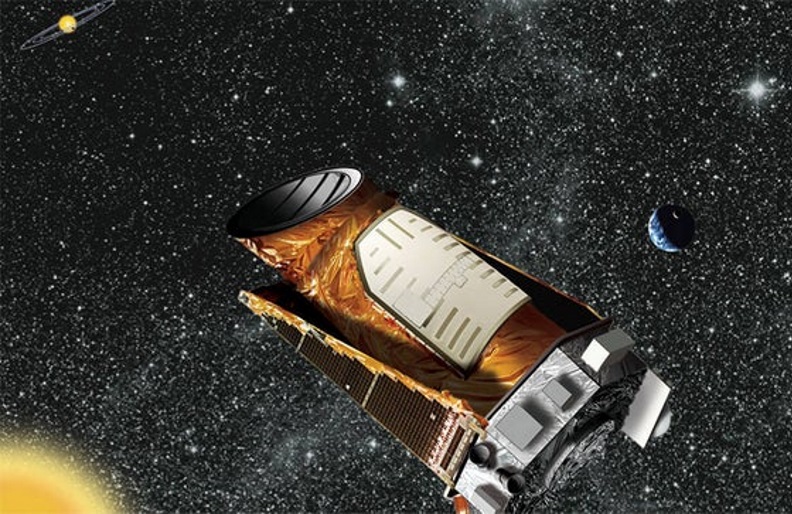 Here in this isolated corner of the Milky Way, our Earth-bound human lives might seem tiny and parochial on a galactic scale. But the universe—vast, deep and presumably infinite—can always be counted on to deliver the unexpected.

Within the bounty of information from the Kepler space telescope, a now-retired exoplanet-hunting observatory, astronomers have spotted a peculiar star whose characteristics defy many of their preconceived notions. After staring at the data about it for more than a year, the team who discovered the strange object, named HD 139139, still does not know what to make of it.

“We’ve never seen anything like this in Kepler, and Kepler’s looked at 500,000 stars,” says Andrew Vanderburg, an astronomer at the University of Texas at Austin and co-author of a new paper on the star, posted to the preprint server ArXiv.

The space-based Kepler telescope, which ended its mission in October 2018, examined light from stars for periodic dips in their brightness—which are usually presumed to indicate a planet passing in front of their face. Astronomers analyze the observatory’s data using algorithms that search for these repeating eclipses of starlight.

But some of these patterns are too complex for computers to tease out; volunteer citizen scientists also comb through the Kepler catalogue, using the human brain’s power to uncover surprising signals. In the spring of 2018 some of these layperson astronomers contacted Vanderburg and told him to check out HD 139139, a sunlike star roughly 350 light-years away.

“When I got that e-mail, I looked more closely and said, ‘okay, this definitely looks like a multiplanet system. But I can’t find any [planets] that appear to line up,'” he recalls.

The star had 28 distinct dips in its light, each of which lasted between 45 minutes and 7.5 hours—and none of which seemed to repeat. The patterns looked more like noise than signal, and at first the team thought it might be some kind of instrument glitch. Yet after careful reanalysis, the data seemed to check out as real.

The first astronomical explanation was that HD 139139 was surrounded by a bunch of planets, at least 14 and perhaps as many as 28—an astounding number, far greater than any known system. Based on their almost-identical light curves, these worlds would all be nearly the same size: slightly bigger than Earth.

The issue is that the extremely short duration of the dips in light suggested that any putative exoplanets would be passing quickly in front of the star, indicating close-in orbits. For none of them to repeat in the 80 days Kepler stared at the star strained credulity.

Another possibility was that a second body—a large planet or unseen star—was tugging gravitationally on the obscurants, causing them to sometimes hasten or delay their eclipsing and produce what looked like a random pattern. But such an object would also be pulling on the central star. After observing HD 139139 with ground-based telescopes, the team found no indication it was being tugged in this way.

The researchers looked into the idea that a planet might be disintegrating in front of the star, producing clouds of dust that would sometimes create dips and other times would not. Such cases have been seen in a small handful of systems, but in all of those examples astronomers were still able to identify the evaporating planet’s orbital period.

Finally, the team wondered if there were short-lived starspots (cooler patches analogous to sunspots) that suddenly appeared and disappeared on HD 139139’s face—a situation nobody had really seen before. Vanderburg says this idea was considered mostly because he and his colleagues felt uncomfortable writing up a paper that did not include some kind of natural explanation.

He says one more possibility was left out of the paper, albeit an extremely unconventional one: an extraterrestrial mega-engineering project blocking the star’s light. Similar speculations arose in 2015, when citizen scientists discovered a Kepler star with odd patterns and notified astronomer Tabetha Boyajian at Louisiana State University at Baton Rouge. The light dips in that case looked intriguing enough that astrophysicist Jason Wright of Pennsylvania State University organized a campaign to listen to the object, eventually nicknamed Tabby’s star, for leaking radio transmissions. The undertaking ultimately turned up nothing unusual.

“When people in our community hear about something like this, the running joke is it might be aliens,” Vanderburg says. The possibility crossed his mind, he adds, as the seemingly-random dips reminded him of the scene in the film Contact in which Jodie Foster’s character begins hearing blips from outer space that trace out a prime number sequence.

The newly noticed star will certainly be added to the list of those investigated for signs of technological activity, Wright says. But he considers it more likely astronomers will eventually settle on an explanation that does not involve intelligent extraterrestrials.Boyajian agrees. “I think we have to consider all options before we go there,” she says. “This is one of those systems where it’s probably not going to be figured out without more data.”

Yet few other observatories can match Kepler’s extreme precision. Most ground-based telescopes are not sensitive enough to see the involved light dips, and it is difficult for researchers to reserve the relatively long stretches of time they would require on a powerful orbiting instrument such as the Hubble Space Telescope. NASA’s recently launched Transiting Exoplanet Survey Satellite (TESS) is not scheduled to look at HD 139139 during its primary campaign, though perhaps if the satellite receives an extended mission it could.

Vanderburg says he and his colleagues are hoping someone in the astronomy community will think of something they have not. In the meantime, the situation remains another example of the universe’s never-ending diversity.

“This put us in our place,” Boyajian says. “It humbles us and reminds us that we really don’t know everything.”

Adam Mann is a journalist specializing in astronomy and physics. His work has appeared in National Geographic, the Wall Street Journal, Wired and elsewhere.

This article was originally published on Scientific American.