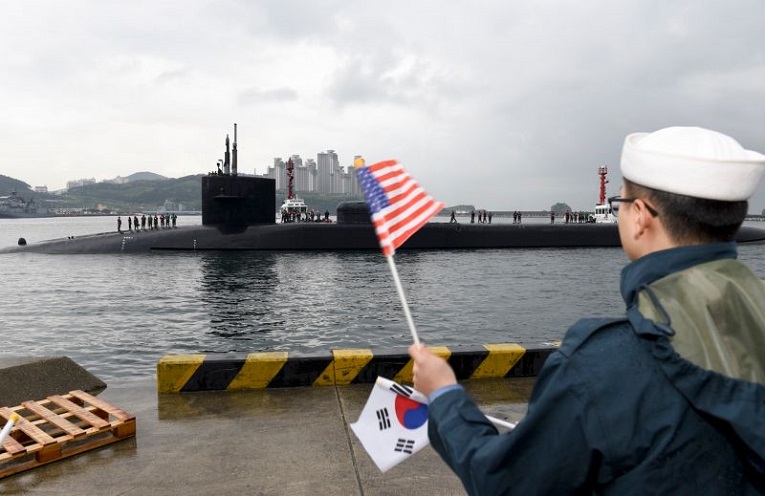 Remember what it felt like a couple of months ago when you, as an American, didn’t give much thought to North Korea? I’d like you to try and remember that feeling over the next couple of weeks, because the US government wants that to change. The past month has shown a tremendous shift in news coverage about North Korea. And that’s no accident.

President Donald Trump continues to beat the drums of war, and the media are going along with him. Trump doesn’t have any particular incentive to bomb North Korea or advocate for regime change in the country. It’s not even clear that Trump knows the leader of North Korea’s name. But Trump is above all a man who likes to be liked. And so far, the actions that have won him the most praise have been when he dropped a bunch of bombs on Syria.

Some talking heads on American TV will insist that we don’t want war. But with a subtle shift in narrative, there comes a sense that “we,” as the world’s police, have no other choice. Once the media talking heads get far enough down that road, constructive criticism of potential war (both at the dinner table and the water cooler) become loaded with questions of “well, if you love North Korea so much, why don’t you move there?”

And just as we saw in the lead up to the second Iraq War in 2003, American military action will begin to feel inevitable. Talks about diplomatic options will be brushed away with “we tried that” and there will be no other course but war.

Then come the slogans: These colors don’t run. Love it or leave it. Liberate Iraq. Or, in this case, Liberate North Korea. And no matter how many times you insist that while you would love to see Kim Jong-un ousted yet don’t want to see war, you will be called a naive traitor—maybe even that greatest of insults, unAmerican—who doesn’t understand how the real world works.

Can North Korea strike the US?

All you need to do is open up the New York Times to see the shift in how Americans now talk about the North Korean threat. In a story published last night, we’re told that there’s a growing sense of urgency, with the headline, “As North Korea Speeds Its Nuclear Program, U.S. Fears Time Will Run Out.”

Behind the Trump administration’s sudden urgency in dealing with the North Korean nuclear crisis lies a stark calculus: a growing body of expert studies and classified intelligence reports that conclude the country is capable of producing a nuclear bomb every six or seven weeks.

By the third paragraph the story is already imagining a hypothetical strike against a US city, in a scenario that we’ve heard off and on since the late 1990s whenever it’s politically expedient:

Now those step-by-step advances have resulted in North Korean warheads that in a few years could reach Seattle. “They’ve learned a lot,” said Siegfried S. Hecker, a Stanford professor who directed the Los Alamos weapons laboratory in New Mexico, the birthplace of the atomic bomb, from 1986 to 1997, and whom the North Koreans have let into their facilities seven times.

And it wouldn’t be the last time that the article cites this outrageous hypothetical that North Korea could strike US cities. The New York Times even drops in the possibility of North Korea hitting New York “one day.”

Unless something changes, North Korea’s arsenal may well hit 50 weapons by the end of Mr. Trump’s term, about half the size of Pakistan’s. American officials say the North already knows how to shrink those weapons so they can fit atop one of its short- to medium-range missiles — putting South Korea and Japan, and the thousands of American troops deployed in those two nations, within range. The best estimates are that North Korea has roughly 1,000 ballistic missiles in eight or so varieties.

But fulfilling Mr. Kim’s dream — putting a nuclear weapon atop an intercontinental ballistic missile that can reach Seattle or Los Angeles, or one day New York — remains a more complex problem.

Again, this might be a good time to pause and think about your feelings on North Korea a few months ago. Was the country an existential threat to you then? If you’re feeling more inclined to support a preemptive war against North Korea, as Trump has said is now a very real possibility, what changed? Was it reading an article that said North Korea could one day, possibly, maybe hit the United States with a nuclear weapon?
[insert_php] wp_link_pages( ‘before=

An easy win against an inferior enemy?

Or, take this story from Fox News published yesterday. We’re told that military victory in North Korea would be easy, according to “experts.”

If tensions between the U.S. and North Korea reach the point where America uses its mighty air power against the rogue nation, it won’t be much of a battle, experts told Fox News.

In recent weeks, Secretary of State Rex Tillerson has warned that all options “are on the table” should the communist dictatorship continue to threaten its neighbors and the U.S. Vice President Mike Pence echoed that sentiment, saying “North Korea would do well not to test [President Trump’s] resolve or the strength of the armed forces of the United States in this region.”

If that strength includes U.S. airpower, North Korea’s antiquated Korean People’s Army Air Force (KPAAF) wouldn’t be able to put up much of a fight.

If you’re old enough to remember the invasion of Iraq in 2003, you’ll recall that Americans were also sold on the idea that victory would be easy. Notably, the piece never mentions or considers what happens after you “defeat” an enemy like Iraq or North Korea.

At least we haven’t gotten to the part yet where Americans are being told that North Koreans will welcome us as liberators. They said that about Iraq, and it turned out to not be the case—in a very major way.

In North Korea, every person is taught from childhood that the United States and Japan are the most evil countries on the planet. Something tells me that North Korea’s standing army of 1.3 million troops won’t greet American or Japanese forces as liberators. Even if North Korea’s elite dictatorship were wiped away with a magic wand tomorrow, it’s difficult to predict how the populace would react.

In order for the United States to strike North Korea, the Trump regime hypothetically needs buy-in from three places: the international community, Congress, and the American people.

When it comes to the international community, Trump has more or less gotten permission to do whatever he wants from allies like Australia and Japan. In fact, Australian Prime Minister Malcolm Turnbull is expected to meet face-to-face with Donald Trump for the first time as early as next week. The temporary caretaker government in South Korea doesn’t want war, but it’s easier than ever for Trump to push them around, at least until elections are held on May 9th. And State Department Secretary Tillerson is reportedly charing a special meeting of the UN Security Council on Friday.

“The meeting will give Security Council members an opportunity to discuss ways to maximize the impact of existing Security Council measures and show their resolve to respond to further provocations with appropriate new measures,” a State Department spokesperson said yesterday.

As for Congress, they’re going to get the hard-nosed sales pitch from the Trump regime this week. All one hundred US Senators are meeting at the White House on Wednesday morning for a classified briefing by Defense Secretary Jim “Mad Dog” Mattis, Chairman of the Joint Chiefs of Staff Joe Dunford, State Department Secretary Rex Tillerson, and the Director of National Intelligence, Dan Coats. A similar briefing is being planned for members of the House.

And lastly, there’s the American public, who need to be persuaded that North Korea is a threat to the American way of life through the media. Again, we’re seeing that happening in real time as news stories that are eerily reminiscent of past wars rear their ugly head.

I don’t know the future. I have no idea if the United States is going to invade North Korea or drop bombs on Kim Jong-un’s brutal regime. But the stars are aligning this week for a slick sales job, just as we saw in 2003 before the invasion of Iraq. And that should scare the hell out of anyone who believes that the US and its allies have very little to gain and a lot to lose by starting a war (nuclear or otherwise) on the Korean peninsula.

The next time you read a story about North Korea or see something about the country on TV, simply ask yourself what changed? Did North Korea become a tangible threat to the safety and security of the United States in just a few short months? Or are you being sold on the idea of a war?

If it’s the latter, and you were duped into believing that the invasion of Iraq in 2003 was a good idea, maybe take a moment to reflect on what we’re being sold today. The lives of a lot of people in South Korea, Japan, North Korea and maybe even the US and China depend on what we decide to do next.