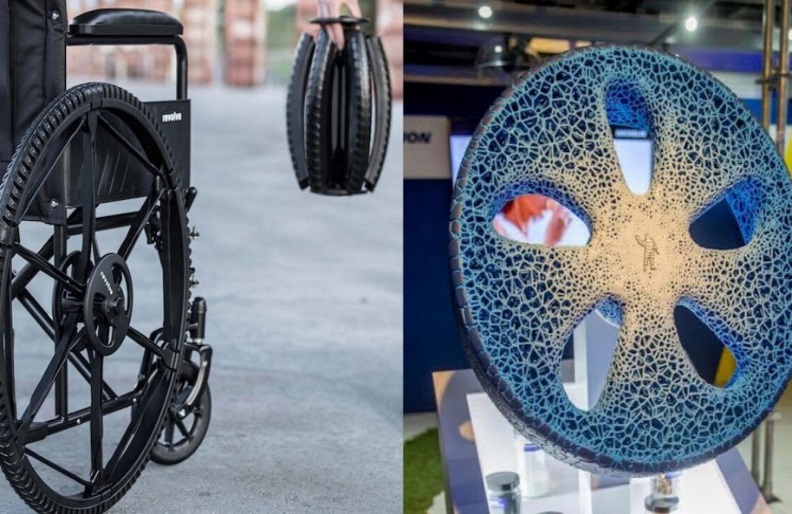 It is widely believed that you cannot reinvent the wheel and, yet, we beg to disagree. Here are 7 trailblazing wheel inventions bound to convince even the biggest of skeptics.

Reinventing the wheel is a derisive expression used to say that any improvements made upon a product are merely unoriginal duplications of an already existing version. The saying comes from the fact that many believe the wheel cannot be reinvented.

Well, we beg to disagree and, in this article, we bring you seven wheel reinventions that prove that inspiration can and does strike several times. [5 Futuristic Technologies]

We love these crazy, edgy, fun and useful wheel innovations and we hope you will enjoy them too!

What if a wheel could shape-shift to adapt to the terrain it was navigating? That was the thinking behind Defense Advanced Research Projects Agency’s (DARPA) Ground X-Vehicle Technologies project for future combat vehicles.

DARPA worked with a team from the Carnegie Mellon University National Robotics Engineering Center to produce what they call the Reconfigurable Wheel-Track. This shape-shifting wheel can seamlessly transition from a round shape to a triangular one and back again while its vehicle is in motion.

2. The wheel that is a Bluetooth speaker

Tire company Pirelli is known worldwide for its impressive aerodynamic tires used by Formula 1 teams. Now, the firm has introduced a replica of its famous wind tunnel model that is in actuality a Bluetooth speaker.

The Pirelli P Zero Sound can pair to phones, tablets, laptops and other devices to blast sound through a 100-watt amplifier. Equipped with Bluetooth 4.0 and AptX connectivity, these fashionable lively wheels deliver quality audio reproduction off the race track and come in the nine colors available on the race track.

OK, we are getting ahead of ourselves as this wheel has not yet been made!

However, scientists at Harvard John A. Paulson School of Engineering and Applied Sciences have developed a new kind of rubber that is as tough as the material that makes up car tires but also capable of self-healing.

“Imagine that we could use this material as one of the components to make a rubber tire,” said one of the project’s researchers Jinrong Wu. “If you have a cut through the tire, this tire wouldn’t have to be replaced right away. Instead, it would self-heal while driving enough to give you leeway to avoid dramatic damage.”

This unique wheel created by German designer Andrea Mocellin has been designed to be multi-purpose, it can be used on both bicycles and wheelchairs, and, most importantly, space-saving. Called the Revolve, this 26-inch airless tire can be quickly and easily folded into a third of its original size and locked safely into position.

Mocellin says his model is the first ever modular wheel and the video below proves he does not lie! Best of all, this self-collapsing wheel is light making it easy to carry and versatile enough to store anywhere.

5. The spherical AI wheel of the future

Last year, tire company Goodyear unveiled its plans for a futuristic smart and connected tire that would also come in the shape of a sphere. The firm called its advanced wheel concept the Eagle 360 Urban and said it would be the first tire to be powered by artificial intelligence (AI).

The spherical wheel would be equipped with many high-tech features allowing it to “sense, decide, transform and interact.” The revolutionary tire is still just an idea for now but, once developed, Goodyear hopes their design will be found on the autonomous vehicles of the future.

Featuring what this wheel’s creators call “3-arm suspension technology”, the SoftWheel is a unique innovation in tires that can be adapted to work on bicycles, wheelchairs and cars to provide shock and vibration relief for all kinds of users. The firm claims its design reformulates Newton’s third law of motion in order to deliver unparallel comfort, security and protection against testy terrains.

“The technology enables the wheel to act as a rigid wheel over flat surfaces, conserving a rider’s energy and maintaining forward momentum (and reducing bounce on flat surfaces). It activates and acts as a shock absorber when the wheelchair encounters an obstacle or rough terrain, reducing shocks and vibrations,” explained SoftWheel Product Manager Yoav Satz to journal Medical Developments.

We covered this beauty when it came out last June but we could not help but include it again in our list. In addition to being 3D printed and airless, this Michelin concept vision of a futuristic tire would also be smart, rechargeable and organic.

This elaborate model, named ‘tweel,’ would be printed from bio-sourced materials into a design that mimics the natural cellular structures of coral, ensuring that it never blows out. It would also be equipped with sensors that would monitor and report its condition to its user.

These are some of our favorite wheel innovations but the list is by no means exhaustive. The truth is that the wheel is constantly being reinvented and with good reason!

The shape allows for many novel and groundbreaking adaptations with ever-evolving new applications. If this article has left you hungry for more innovative wheel-related content, read our piece on Goodyear’s air quality improving tire or check out NASA’s super-elastic tires built for Mars.

This article was originally published by Interesting Engineering.