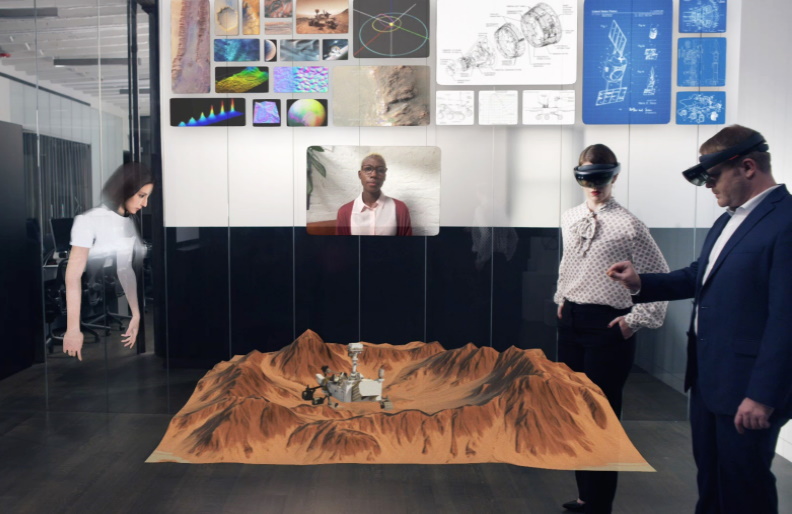 Spatial is a startup that enables people to meet through augmented or virtual reality. It’s a little similar to the now defunct Facebook Spaces, except it has much broader support. You can use VR or mixed-reality headsets from a myriad of brands—from Microsoft’s HoloLens and Nreal’s Light to the Oculus Quest—as vehicles to meet in virtual spaces.

So far, the experience has required everyone to jack in using a headset in order to join a meeting. Today however, Spatial is announcing that it’s launching support for web browsers on desktops, Android, and iOS. Oh, and the platform is now completely free and open to everyone.

“In light of Covid, we’ve actually had an intense amount of demand—about a 1,000 percent increase,” Anand Agarawala, Spatial’s CEO and cofounder, tells me in a beautiful virtual room filled with sunlight and surrounded by mountains. “Zoom is not a good replacement for being in the office with other people, whereas something like VR gives you that level of presence and personification.”

He’s not wrong. I love my biweekly Zoom chats with my coworkers, but being able to stand next to someone’s virtual avatar (closer than 6 feet!) and watch their hands gesticulate while they talk makes me feel more connected and focused. Plus, I’m in a scenic room that I can move around in, and I can pick up and play with random objects while listening. It is, naturally, more engaging than staring at a grid of faces.

Until now, the burgeoning company has strictly been an enterprise-only service, with clients ranging from Mattel to Pfizer. It was meant to serve as a way for those in offices to connect with remote team members around the globe, but remote work has tremendously accelerated due to the coronavirus pandemic.

Jacob Loewenstein, the head of business at Spatial and the guy who gave me that virtual fist bump, says Spatial’s primary use case has been 3D design collaboration. Companies like Mattel have designers that bring their creations into virtual meeting rooms and iterate on them in the naturally collaborative environment. Then, the designers bring in the team from China to show off the final manufactured product as a 3D render to compare their work and suggest alterations. This kind of virtual collaboration doesn’t just allow people to work from all parts of the globe, it also removes the need for folks to fly to offices just to physically see product development.

Other enterprise clients, Loewenstein says, are using Spatial as persistent war rooms, where people meet once or twice a week for virtual check-ins. Now, with Spatial opening up for free and becoming more accessible, Loewenstein hopes even more people will use the platform to connect for all sorts of reasons. Some folks are already using Spatial to teach seminars, he says.

“Video chat really wasn’t made for that use case,” Loewenstein says. “Video chat is a tool that was basically good for two things: very personal conversations in small groups or big webinars where you don’t need to interact. But for anything in between it breaks down, and that’s where we see Spatial really being a much more interactive and much more personal collaboration solution.”

The free version temporarily gives you unlimited access to all the enterprise features. Agarawala says a free version will always exist, but limitations will be added back in (like 40-minute sessions and up to three saved project rooms) once social-distancing orders wind down.

During my sessions in Spatial, I played around with a 3D model of the Curiosity rover—expanding, miniaturizing, and scribbling on it with my hands to highlight specific parts of it, just like I imagine a NASA engineer might. Don’t have your own 3D models? No matter. You can run a Google search for anything and a low-poly 3D model will automatically pop up out of thin air. It’s how I managed to surround myself with a pack of virtual dogs.

You can also write notes in Spatial, share your screen via the web app, upload presentations, and apparently, even have a virtual party.

Spatial works best with more than two people in augmented or virtual reality—joining in from the web is a nice addition to include folks that don’t have a headset, but if only one person has a virtual avatar, the experience is a bit awkward.

The cost of immersive headsets is high, so while the service is more cross-platform than most others, it’s not as accessible as Spatial might suggest, at least until the cost of VR and AR hardware comes down. The company says it’s working on iPhone and Android apps that will use the phone’s camera to recreate the virtual avatar experience at a more affordable and accessible level.

All you need to use Spatial is an email address for securing an account. Those with AR and VR devices can snap a picture of their face to build an avatar. (The results are … OK. And no, I do not have a mullet in real life.) Then, you just need to create a room. You can invite people to your room via a web URL and anyone can join and watch the fun. If you have a headset, you’ll have a virtual body with arms that swing around as you move your limbs in real life, a mouth that moves when you talk, and eyes that blink. (And if you don’t, you’ll appear as a floating rectangular 2D screen with footage from your webcam on display.)

The avatars could use some polish—Agarawala says that’s on the agenda. But for now, I’m just happy you can do a fist bump.

This article was originally published on WIRED