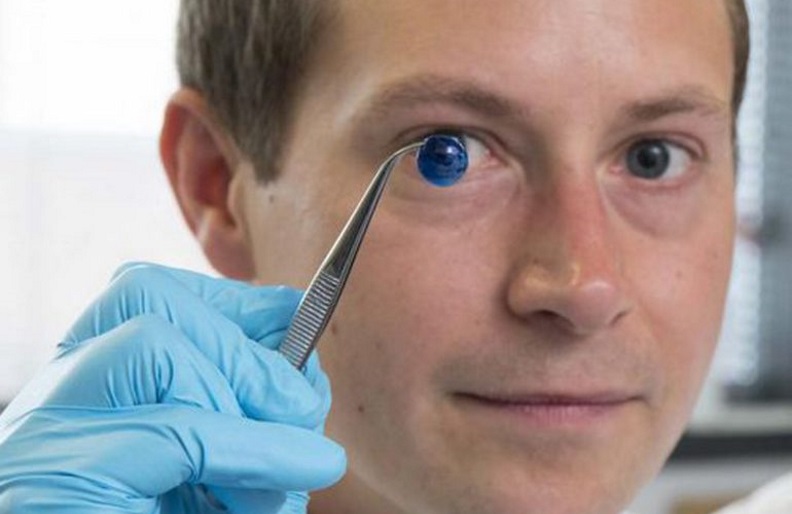 Scientists have 3D printed the thin protective film over the eye, called the cornea, using human cells — and it’s the most advanced version of an artificial cornea yet. Should the technology improve, it could help millions of people see again.

It was tricky to find the right recipe for an ink that’s thin enough to squirt through a 3D printer’s nozzle, says Che Connon, a tissue engineer at Newcastle University who was one of the creators of the artificial cornea. This bio-ink didn’t just have to be thin — it also had to be stiff enough that it could hold its shape as a 3D structure. To get the right consistency, the researchers added a jelly-like goo called alginate and stem cells extracted from donor corneas, along with some ropy proteins called collagen.

The cornea is the first lens light passes through before eventually hitting the retina at the back of the eye. Damage to the cornea — from injury or infection — can distort vision, or even lead to blindness. Right now, the damaged corneas are replaced with healthy ones from deceased donors, but there aren’t enough donated corneas to go around. Nearly 5 million people around the world are blind because infection scarred their corneas, according to the World Health Organization.

The new technique, described today in the journal Experimental Eye Research, doesn’t completely eliminate a need for cornea donations — those are key for making the stem cell part of the recipe. But, using this technique, the donation goes a lot farther, Connon says. Instead of replacing one damaged cornea with one healthy one, you could grow enough cells from one donated cornea to print 50 artificial ones.

To figure out what exactly to print, the team also had to figure out the shape of a human cornea. So the researcher’s used a special camera to image a volunteer’s eyeball and create a 3D model of their cornea. Then, the team fed that template to a 3D printer, which squirted the bio-ink into a supportive bed of Jello to create the cornea. The result looks like a soft contact lens in a bath of goo.

But there’s still a long way to go before these artificial corneas will even get close to a human eyeball: Connon wants to fine tune the printing process first, he says, and the artificial cornea will also need to go through safety studies in animals. But this study is proof that you can 3D print something that looks like a cornea, and contains mostly the same ingredients. It’s also the first time researchers have recreated the cornea’s distinctive, curved shape. Connon says that’s key for the artificial cornea to work: “Without the shape, you don’t have a cornea — you have something else.”

This article was originally published by The Verge.